Is Teleflex Incorporated (TFX) A Good Stock To Buy?

Is Teleflex Incorporated (NYSE:TFX) a buy right now? The smart money is taking a bullish view. The number of bullish hedge fund bets improved by 4 in recent months. Our calculations also showed that tfx isn’t among the 30 most popular stocks among hedge funds.

At the end of the first quarter, a total of 19 of the hedge funds tracked by Insider Monkey were long this stock, a change of 27% from one quarter earlier. By comparison, 23 hedge funds held shares or bullish call options in TFX a year ago. With hedge funds’ capital changing hands, there exists a select group of notable hedge fund managers who were adding to their stakes considerably (or already accumulated large positions). 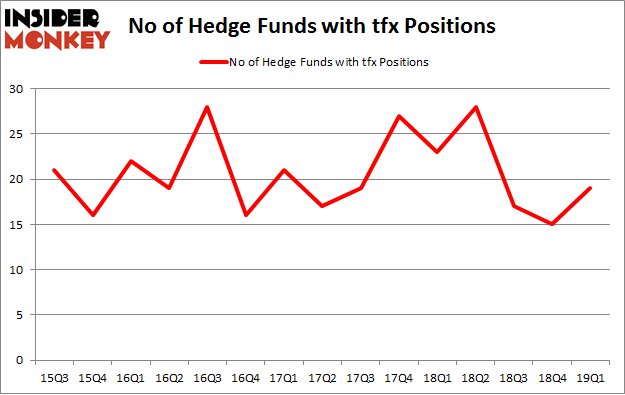 More specifically, Select Equity Group was the largest shareholder of Teleflex Incorporated (NYSE:TFX), with a stake worth $292.9 million reported as of the end of March. Trailing Select Equity Group was Marshall Wace LLP, which amassed a stake valued at $180.3 million. Millennium Management, Polar Capital, and Rock Springs Capital Management were also very fond of the stock, giving the stock large weights in their portfolios.

With a general bullishness amongst the heavyweights, key money managers have been driving this bullishness. Polar Capital, managed by Brian Ashford-Russell and Tim Woolley, assembled the biggest position in Teleflex Incorporated (NYSE:TFX). Polar Capital had $58.9 million invested in the company at the end of the quarter. Ken Griffin’s Citadel Investment Group also made a $28.9 million investment in the stock during the quarter. The other funds with new positions in the stock are Phill Gross and Robert Atchinson’s Adage Capital Management, Andrew Feldstein and Stephen Siderow’s Blue Mountain Capital, and John Overdeck and David Siegel’s Two Sigma Advisors.

As you can see these stocks had an average of 16 hedge funds with bullish positions and the average amount invested in these stocks was $3715 million. That figure was $765 million in TFX’s case. Devon Energy Corp (NYSE:DVN) is the most popular stock in this table. On the other hand Icahn Enterprises LP (NASDAQ:IEP) is the least popular one with only 5 bullish hedge fund positions. Teleflex Incorporated (NYSE:TFX) is not the most popular stock in this group but hedge fund interest is still above average. This is a slightly positive signal but we’d rather spend our time researching stocks that hedge funds are piling on. Our calculations showed that top 20 most popular stocks among hedge funds returned 1.9% in Q2 through May 30th and outperformed the S&P 500 ETF (SPY) by more than 3 percentage points. Unfortunately TFX wasn’t nearly as popular as these 20 stocks and hedge funds that were betting on TFX were disappointed as the stock returned -3.6% during the same period and underperformed the market. If you are interested in investing in large cap stocks with huge upside potential, you should check out the top 20 most popular stocks among hedge funds as 13 of these stocks already outperformed the market so far in Q2.