Is Teledyne Technologies Incorporated (TDY) A Good Stock To Buy?

A whopping number of 13F filings filed with U.S. Securities and Exchange Commission has been processed by Insider Monkey so that individual investors can look at the overall hedge fund sentiment towards the stocks included in their watchlists. These freshly-submitted public filings disclose money managers’ equity positions as of the end of the three-month period that ended September 30, so let’s proceed with the discussion of the hedge fund sentiment on Teledyne Technologies Incorporated (NYSE:TDY).

Teledyne Technologies Incorporated (NYSE:TDY) was in 19 hedge funds’ portfolios at the end of the third quarter of 2018. TDY has seen a decrease in enthusiasm from smart money recently. There were 24 hedge funds in our database with TDY holdings at the end of the previous quarter. Our calculations also showed that TDY isn’t among the 30 most popular stocks among hedge funds.

What does the smart money think about Teledyne Technologies Incorporated (NYSE:TDY)? 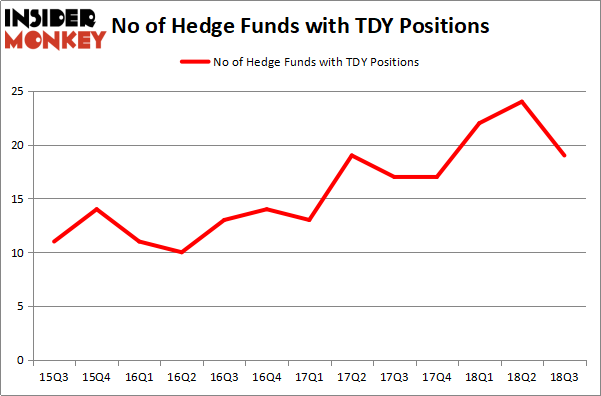 More specifically, Fisher Asset Management was the largest shareholder of Teledyne Technologies Incorporated (NYSE:TDY), with a stake worth $89 million reported as of the end of September. Trailing Fisher Asset Management was Cardinal Capital, which amassed a stake valued at $88.6 million. Select Equity Group, AQR Capital Management, and East Side Capital (RR Partners) were also very fond of the stock, giving the stock large weights in their portfolios.

Seeing as Teledyne Technologies Incorporated (NYSE:TDY) has faced falling interest from hedge fund managers, we can see that there lies a certain “tier” of funds who were dropping their entire stakes in the third quarter. Intriguingly, David Charney and Sky Wilber’s Foundation Asset Management sold off the biggest investment of all the hedgies followed by Insider Monkey, totaling an estimated $6 million in stock, and George Hall’s Clinton Group was right behind this move, as the fund said goodbye to about $4.1 million worth. These moves are interesting, as total hedge fund interest was cut by 5 funds in the third quarter.

As you can see these stocks had an average of 26 hedge funds with bullish positions and the average amount invested in these stocks was $680 million. That figure was $436 million in TDY’s case. Carvana Co. (NYSE:CVNA) is the most popular stock in this table. On the other hand Interpublic Group of Companies Inc (NYSE:IPG) is the least popular one with only 16 bullish hedge fund positions. Teledyne Technologies Incorporated (NYSE:TDY) is not the least popular stock in this group but hedge fund interest is still below average. This is a slightly negative signal and we’d rather spend our time researching stocks that hedge funds are piling on. In this regard CVNA might be a better candidate to consider a long position.