Before we spend countless hours researching a company, we like to analyze what insiders, hedge funds and billionaire investors think of the stock first. This is a necessary first step in our investment process because our research has shown that the elite investors’ consensus returns have been exceptional. In the following paragraphs, we find out what the billionaire investors and hedge funds think of TCR2 Therapeutics Inc. (NASDAQ:TCRR).

TCR2 Therapeutics Inc. (NASDAQ:TCRR) has seen a decrease in hedge fund interest lately. Our calculations also showed that TCRR isn’t among the 30 most popular stocks among hedge funds (see the video below). 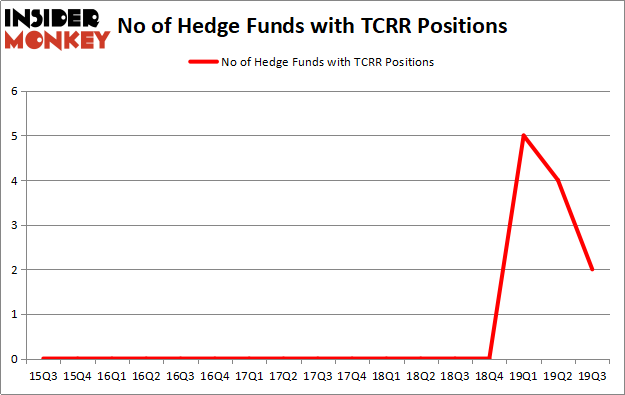 More specifically, Redmile Group was the largest shareholder of TCR2 Therapeutics Inc. (NASDAQ:TCRR), with a stake worth $26.9 million reported as of the end of September. Trailing Redmile Group was Hillhouse Capital Management, which amassed a stake valued at $4.9 million.

Judging by the fact that TCR2 Therapeutics Inc. (NASDAQ:TCRR) has faced bearish sentiment from hedge fund managers, logic holds that there lies a certain “tier” of funds who sold off their entire stakes in the third quarter. Intriguingly, Israel Englander’s Millennium Management said goodbye to the largest investment of the 750 funds tracked by Insider Monkey, comprising about $2 million in stock, and Oleg Nodelman’s EcoR1 Capital was right behind this move, as the fund dumped about $0.2 million worth. These transactions are intriguing to say the least, as total hedge fund interest fell by 2 funds in the third quarter.

As you can see these stocks had an average of 12 hedge funds with bullish positions and the average amount invested in these stocks was $60 million. That figure was $32 million in TCRR’s case. American Public Education, Inc. (NASDAQ:APEI) is the most popular stock in this table. On the other hand Just Energy Group, Inc. (NYSE:JE) is the least popular one with only 8 bullish hedge fund positions. Compared to these stocks TCR2 Therapeutics Inc. (NASDAQ:TCRR) is even less popular than JE. Hedge funds clearly dropped the ball on TCRR as the stock delivered strong returns, though hedge funds’ consensus picks still generated respectable returns. Our calculations showed that top 20 most popular stocks among hedge funds returned 34.7% in 2019 through November 22nd and outperformed the S&P 500 ETF (SPY) by 8.5 percentage points. A small number of hedge funds were also right about betting on TCRR as the stock returned 9.4% during the fourth quarter (through 11/22) and outperformed the market by an even larger margin.

Here is the 17th Most Popular Stock Among 752 Hedge Funds
Monthly Newsletter Strategy
Download a free copy of our newsletter and see the details inside!
Hedge Fund Resource Center
Related News
10 Human Trafficking Stories in America 10 Easiest Instruments For Adults To Learn On Their Own 10 Most Profitable Franchises In The World
Billionaire Hedge Funds