Is Tallgrass Energy (TGE) A Good Stock To Buy According To Hedge Funds?

Insider Monkey has processed numerous 13F filings of hedge funds and famous investors to create an extensive database of hedge fund holdings. The 13F filings show the hedge funds’ and investors’ positions as of the end of the fourth quarter. You can find write-ups about an individual hedge fund’s trades on numerous financial news websites. However, in this article we will take a look at their collective moves and analyze what the smart money thinks of Tallgrass Energy, LP (NYSE:TGE) based on that data.

Is Tallgrass Energy, LP (NYSE:TGE) a buy, sell, or hold? The smart money is buying. The number of long hedge fund bets advanced by 2 in recent months. Our calculations also showed that TGE isn’t among the 30 most popular stocks among hedge funds.

What does the smart money think about Tallgrass Energy, LP (NYSE:TGE)?

Heading into the first quarter of 2019, a total of 8 of the hedge funds tracked by Insider Monkey held long positions in this stock, a change of 33% from one quarter earlier. The graph below displays the number of hedge funds with bullish position in TGE over the last 14 quarters. With hedgies’ capital changing hands, there exists a few notable hedge fund managers who were adding to their holdings substantially (or already accumulated large positions). 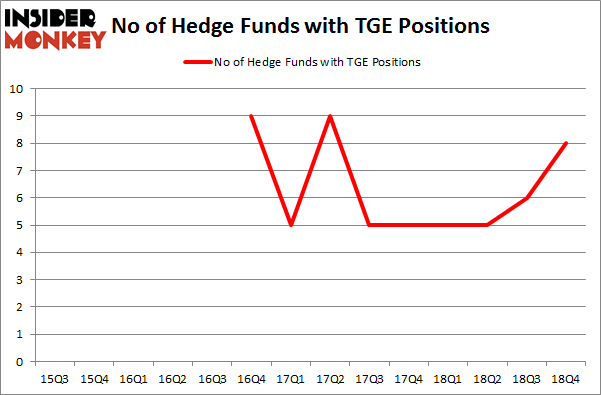 The largest stake in Tallgrass Energy, LP (NYSE:TGE) was held by Yaupon Capital, which reported holding $13 million worth of stock at the end of September. It was followed by Governors Lane with a $5.5 million position. Other investors bullish on the company included Citadel Investment Group, Holocene Advisors, and BP Capital.

As industrywide interest jumped, specific money managers have been driving this bullishness. Yaupon Capital, managed by Steve Pattyn, initiated the largest position in Tallgrass Energy, LP (NYSE:TGE). Yaupon Capital had $13 million invested in the company at the end of the quarter. Isaac Corre’s Governors Lane also initiated a $5.5 million position during the quarter. The other funds with new positions in the stock are Steve Pattyn’s Yaupon Capital, T Boone Pickens’s BP Capital, and Noam Gottesman’s GLG Partners.

As you can see these stocks had an average of 18 hedge funds with bullish positions and the average amount invested in these stocks was $478 million. That figure was $22 million in TGE’s case. SCANA Corporation (NYSE:SCG) is the most popular stock in this table. On the other hand Wabtec Corporation (NYSE:WAB) is the least popular one with only 10 bullish hedge fund positions. Compared to these stocks Tallgrass Energy, LP (NYSE:TGE) is even less popular than WAB. Our calculations showed that top 15 most popular stocks among hedge funds returned 21.3% through April 8th and outperformed the S&P 500 ETF (SPY) by more than 5 percentage points. Unfortunately TGE wasn’t in this group. Hedge funds that bet on TGE were disappointed as the stock returned 4.1% and underperformed the market. If you are interested in investing in large cap stocks, you should check out the top 15 hedge fund stocks as 12 of these outperformed the market.