Is Tahoe Resources Inc (TAHO) A Good Stock To Buy?

Is Tahoe Resources Inc (NYSE:TAHO) a good equity to bet on right now? We like to check what the smart money thinks first before doing extensive research. Although there have been several high profile failed hedge fund picks, the consensus picks among hedge fund investors have historically outperformed the market after adjusting for known risk attributes. It’s not surprising given that hedge funds have access to better information and more resources to find the latest market-moving information.

Tahoe Resources Inc (NYSE:TAHO) was in 13 hedge funds’ portfolios at the end of September. TAHO has seen a decrease in hedge fund sentiment of late. There were 15 hedge funds in our database with TAHO positions at the end of the previous quarter. Our calculations also showed that TAHO isn’t among the 30 most popular stocks among hedge funds.

What have hedge funds been doing with Tahoe Resources Inc (NYSE:TAHO)?

At Q3’s end, a total of 13 of the hedge funds tracked by Insider Monkey held long positions in this stock, a change of -13% from the second quarter of 2018. The graph below displays the number of hedge funds with bullish position in TAHO over the last 13 quarters. With the smart money’s positions undergoing their usual ebb and flow, there exists a select group of key hedge fund managers who were upping their holdings significantly (or already accumulated large positions). 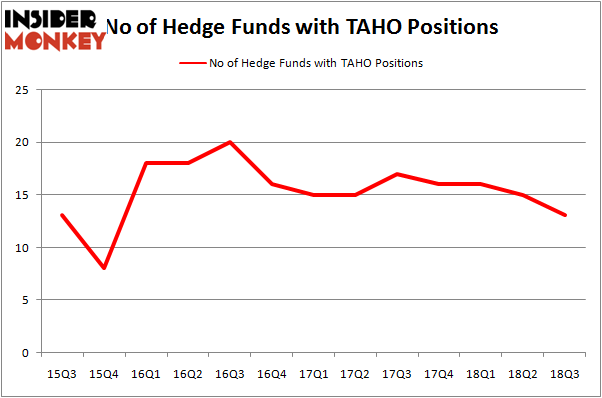 When looking at the institutional investors followed by Insider Monkey, John Burbank’s Passport Capital has the most valuable position in Tahoe Resources Inc (NYSE:TAHO), worth close to $13.8 million, accounting for 28.9% of its total 13F portfolio. On Passport Capital’s heels is Greywolf Capital Management, led by Jonathan Savitz, holding a $11.2 million position; 4.4% of its 13F portfolio is allocated to the company. Other peers that hold long positions consist of Chuck Royce’s Royce & Associates, Ken Griffin’s Citadel Investment Group and Cliff Asness’s AQR Capital Management.

Due to the fact that Tahoe Resources Inc (NYSE:TAHO) has witnessed a decline in interest from the smart money, logic holds that there were a few money managers who sold off their positions entirely last quarter. Interestingly, Phill Gross and Robert Atchinson’s Adage Capital Management dumped the largest position of the 700 funds monitored by Insider Monkey, totaling close to $7.4 million in stock. Mario Gabelli’s fund, GAMCO Investors, also sold off its stock, about $0.3 million worth. These moves are intriguing to say the least, as aggregate hedge fund interest was cut by 2 funds last quarter.

As you can see these stocks had an average of 10.5 hedge funds with bullish positions and the average amount invested in these stocks was $110 million. That figure was $33 million in TAHO’s case. Fate Therapeutics Inc (NASDAQ:FATE) is the most popular stock in this table. On the other hand Blackrock Resources & Commodities Strategy Trust (NYSE:BCX) is the least popular one with only 3 bullish hedge fund positions. Tahoe Resources Inc (NYSE:TAHO) is not the most popular stock in this group but hedge fund interest is still above average. This is a slightly positive signal but we’d rather spend our time researching stocks that hedge funds are piling on. In this regard FATE might be a better candidate to consider a long position.