Before we spend days researching a stock idea we like to take a look at how hedge funds and billionaire investors recently traded that stock. Russell 2000 ETF (IWM) lagged the larger S&P 500 ETF (SPY) by more than 10 percentage points since the end of the third quarter of 2018. This means hedge funds that are allocating a higher percentage of their portfolio to small-cap stocks were probably underperforming the market. However, this also means that as small-cap stocks start to mean revert, these hedge funds will start delivering better returns than the S&P 500 Index funds. In this article, we will take a look at what hedge funds think about Switch, Inc. (NYSE:SWCH).

Switch, Inc. (NYSE:SWCH) investors should be aware of a decrease in hedge fund sentiment recently. Our calculations also showed that SWCH isn’t among the 30 most popular stocks among hedge funds (view the video below).

What does smart money think about Switch, Inc. (NYSE:SWCH)?

Heading into the third quarter of 2019, a total of 13 of the hedge funds tracked by Insider Monkey were long this stock, a change of -19% from the previous quarter. The graph below displays the number of hedge funds with bullish position in SWCH over the last 16 quarters. With hedge funds’ positions undergoing their usual ebb and flow, there exists a few noteworthy hedge fund managers who were upping their holdings meaningfully (or already accumulated large positions). 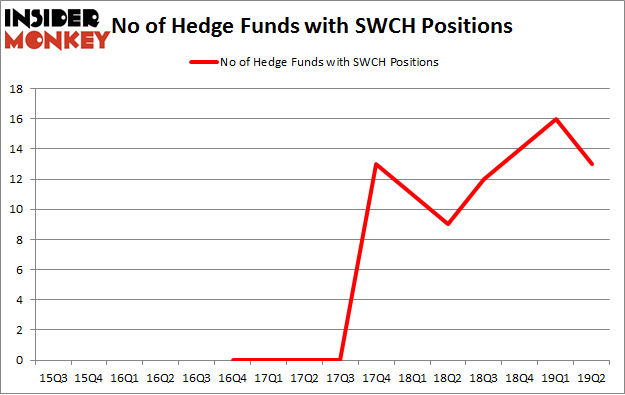 When looking at the institutional investors followed by Insider Monkey, Daniel Patrick Gibson’s Sylebra Capital Management has the largest position in Switch, Inc. (NYSE:SWCH), worth close to $99.9 million, accounting for 4.6% of its total 13F portfolio. On Sylebra Capital Management’s heels is Renaissance Technologies, with a $36.9 million position; less than 0.1%% of its 13F portfolio is allocated to the company. Other professional money managers that hold long positions contain Chase Coleman’s Tiger Global Management LLC, Richard Mashaal’s Rima Senvest Management and Israel Englander’s Millennium Management.

Since Switch, Inc. (NYSE:SWCH) has experienced bearish sentiment from the aggregate hedge fund industry, logic holds that there exists a select few money managers that elected to cut their entire stakes by the end of the second quarter. At the top of the heap, Richard Driehaus’s Driehaus Capital sold off the biggest position of the 750 funds followed by Insider Monkey, valued at about $2.2 million in call options. Matthew Hulsizer’s fund, PEAK6 Capital Management, also said goodbye to its call options, about $1.4 million worth. These moves are important to note, as total hedge fund interest fell by 3 funds by the end of the second quarter.

As you can see these stocks had an average of 18.75 hedge funds with bullish positions and the average amount invested in these stocks was $285 million. That figure was $221 million in SWCH’s case. Louisiana-Pacific Corporation (NYSE:LPX) is the most popular stock in this table. On the other hand Cantel Medical Corp. (NYSE:CMD) is the least popular one with only 11 bullish hedge fund positions. Switch, Inc. (NYSE:SWCH) is not the least popular stock in this group but hedge fund interest is still below average. Our calculations showed that top 20 most popular stocks among hedge funds returned 24.4% in 2019 through September 30th and outperformed the S&P 500 ETF (SPY) by 4 percentage points. A small number of hedge funds were also right about betting on SWCH as the stock returned 19.6% during the same time frame and outperformed the market by an even larger margin.