Is Sunoco LP (SUN) A Good Stock To Buy?

“Market conditions are changing. The continued rise in interest rates suggests we are in the early stages of a bond bear market, which could intensify as central banks withdraw liquidity. The receding tide of liquidity will start to reveal more rocks beyond what has been exposed in emerging markets so far, and the value of a value discipline will be in avoiding the biggest capital-destroying rocks. If a rock emerges on the crowded shore of U.S. momentum, it could result in a major liquidity challenge, as momentum is often most intense on the downside as a crowded trade reverses. So investors are facing a large potential trade-off right now: continue to bet on the current dominance of momentum and the S&P 500, or bet on change and take an active value bet in names with attractive value and optionality, but with negative momentum,” said Clearbridge Investments in its market commentary. We aren’t sure whether long-term interest rates will top 5% and value stocks outperform growth, but we follow hedge fund investor letters to understand where the markets and stocks might be going. This article will lay out and discuss the hedge fund and institutional investor sentiment towards Sunoco LP (NYSE:SUN).

Sunoco LP (NYSE:SUN) shares haven’t seen a lot of action during the third quarter. Overall, hedge fund sentiment was unchanged. The stock was in 7 hedge funds’ portfolios at the end of December. The level and the change in hedge fund popularity aren’t the only variables you need to analyze to decipher hedge funds’ perspectives. A stock may witness a boost in popularity but it may still be less popular than similarly priced stocks. That’s why at the end of this article we will examine companies such as Liberty Expedia Holdings, Inc. (NASDAQ:LEXEA), WESCO International, Inc. (NYSE:WCC), and Korn Ferry (NYSE:KFY) to gather more data points.

Today there are several signals shareholders put to use to assess stocks. Two of the best signals are hedge fund and insider trading interest. We have shown that, historically, those who follow the top picks of the best money managers can outpace their index-focused peers by a healthy amount (see the details here).

How have hedgies been trading Sunoco LP (NYSE:SUN)? 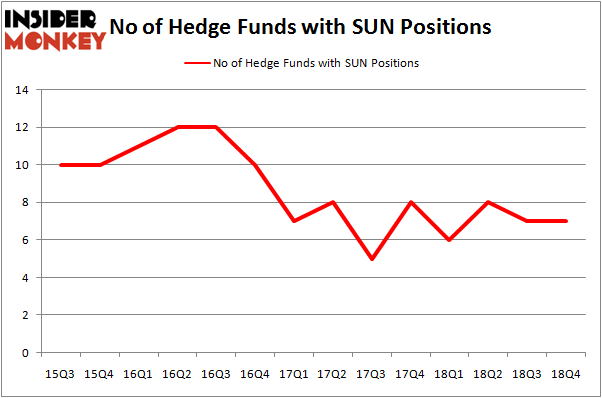 Among these funds, MSDC Management held the most valuable stake in Sunoco LP (NYSE:SUN), which was worth $5.5 million at the end of the third quarter. On the second spot was Wexford Capital which amassed $1.9 million worth of shares. Moreover, Pentwater Capital Management, PEAK6 Capital Management, and Citadel Investment Group were also bullish on Sunoco LP (NYSE:SUN), allocating a large percentage of their portfolios to this stock.

We view hedge fund activity in the stock unfavorable, but in this case there was only a single hedge fund selling its entire position: Renaissance Technologies. One hedge fund selling its entire position doesn’t always imply a bearish intent. Theoretically a hedge fund may decide to sell a promising position in order to invest the proceeds in a more promising idea. However, we don’t think this is the case in this case because only one of the 800+ hedge funds tracked by Insider Monkey identified as a viable investment and initiated a position in the stock (that fund was PEAK6 Capital Management).

As you can see these stocks had an average of 20.25 hedge funds with bullish positions and the average amount invested in these stocks was $206 million. That figure was $11 million in SUN’s case. Liberty Expedia Holdings, Inc. (NASDAQ:LEXEA) is the most popular stock in this table. On the other hand Eldorado Gold Corp (NYSE:EGO) is the least popular one with only 8 bullish hedge fund positions. Compared to these stocks Sunoco LP (NYSE:SUN) is even less popular than EGO. Hedge funds dodged a bullet by taking a bearish stance towards SUN. Our calculations showed that the top 15 most popular hedge fund stocks returned 24.2% through April 22nd and outperformed the S&P 500 ETF (SPY) by more than 7 percentage points. Unfortunately SUN wasn’t nearly as popular as these 15 stock (hedge fund sentiment was very bearish); SUN investors were disappointed as the stock returned 16.6% and underperformed the market. If you are interested in investing in large cap stocks with huge upside potential, you should check out the top 15 most popular stocks) among hedge funds as 13 of these stocks already outperformed the market this year.