During the first half of the fourth quarter the Russell 2000 ETF (IWM) lagged the larger S&P 500 ETF (SPY) by about 4 percentage points as investors worried over the possible ramifications of rising interest rates. The hedge funds and institutional investors we track typically invest more in smaller-cap stocks than an average investor (i.e. only 298 S&P 500 constituents were among the 500 most popular stocks among hedge funds), and we have seen data that shows those funds paring back their overall exposure. Those funds cutting positions in small-caps is one reason why volatility has increased. In the following paragraphs, we take a closer look at what hedge funds and prominent investors think of SunCoke Energy Partners LP (NYSE:SXCP) and see how the stock is affected by the recent hedge fund activity.

SunCoke Energy Partners LP (NYSE:SXCP) shares haven’t seen a lot of action during the third quarter. Overall, hedge fund sentiment was unchanged. The stock was in 6 hedge funds’ portfolios at the end of the third quarter of 2018. The level and the change in hedge fund popularity aren’t the only variables you need to analyze to decipher hedge funds’ perspectives. A stock may witness a boost in popularity but it may still be less popular than similarly priced stocks. That’s why at the end of this article we will examine companies such as Preferred Apartment Communities Inc. (NYSEAMEX:APTS), American Renal Associates Holdings, Inc (NYSE:ARA), and Eldorado Gold Corp (NYSE:EGO) to gather more data points.

What have hedge funds been doing with SunCoke Energy Partners LP (NYSE:SXCP)?

At the end of the third quarter, a total of 6 of the hedge funds tracked by Insider Monkey were bullish on this stock, representing no change from one quarter earlier. Below, you can check out the change in hedge fund sentiment towards SXCP over the last 13 quarters. With the smart money’s capital changing hands, there exists a few key hedge fund managers who were boosting their stakes substantially (or already accumulated large positions). 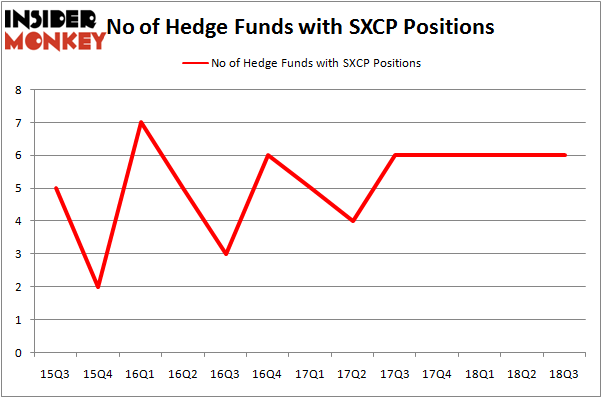 Of the funds tracked by Insider Monkey, Jim Simons’s Renaissance Technologies has the biggest position in SunCoke Energy Partners LP (NYSE:SXCP), worth close to $1.3 million, corresponding to less than 0.1%% of its total 13F portfolio. The second most bullish fund manager is GLG Partners, managed by Noam Gottesman, which holds a $1.2 million position; the fund has less than 0.1%% of its 13F portfolio invested in the stock. Remaining peers with similar optimism comprise John Thiessen’s Vertex One Asset Management, Matthew Hulsizer’s PEAK6 Capital Management and Matthew Hulsizer’s PEAK6 Capital Management.

As you can see these stocks had an average of 7.75 hedge funds with bullish positions and the average amount invested in these stocks was $110 million. That figure was $3 million in SXCP’s case. Grupo Supervielle S.A. (NYSE:SUPV) is the most popular stock in this table. On the other hand Preferred Apartment Communities Inc. (NYSEAMEX:APTS) is the least popular one with only 3 bullish hedge fund positions. SunCoke Energy Partners LP (NYSE:SXCP) is not the least popular stock in this group but hedge fund interest is still below average. This is a slightly negative signal and we’d rather spend our time researching stocks that hedge funds are piling on. In this regard SUPV might be a better candidate to consider a long position.