Is Stepan Company (SCL) A Good Stock To Buy?

Is Stepan Company (NYSE:SCL) a good place to invest some of your money right now? We can gain invaluable insight to help us answer that question by studying the investment trends of top investors, who employ world-class Ivy League graduates, who are given immense resources and industry contacts to put their financial expertise to work. The top picks of these firms have historically outperformed the market when we account for known risk factors, making them very valuable investment ideas.

Stepan Company (NYSE:SCL) investors should be aware of an increase in activity from the world’s largest hedge funds lately. SCL was in 12 hedge funds’ portfolios at the end of the fourth quarter of 2018. There were 10 hedge funds in our database with SCL positions at the end of the previous quarter. Our calculations also showed that scl isn’t among the 30 most popular stocks among hedge funds.

In today’s marketplace there are plenty of methods shareholders use to size up stocks. A pair of the less known methods are hedge fund and insider trading interest. Our experts have shown that, historically, those who follow the top picks of the elite hedge fund managers can outclass their index-focused peers by a solid amount (see the details here).

How have hedgies been trading Stepan Company (NYSE:SCL)? 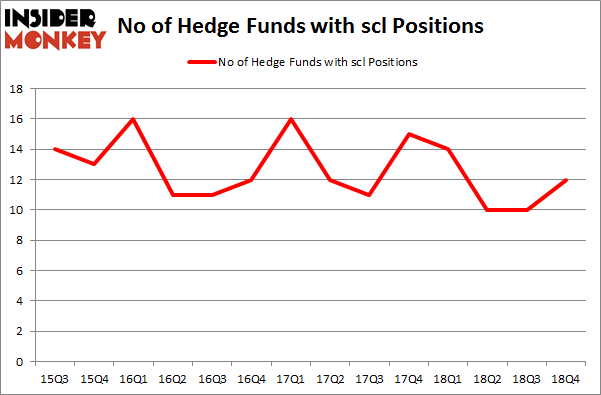 Among these funds, Renaissance Technologies held the most valuable stake in Stepan Company (NYSE:SCL), which was worth $22.9 million at the end of the fourth quarter. On the second spot was GLG Partners which amassed $4.5 million worth of shares. Moreover, AQR Capital Management, Two Sigma Advisors, and Arrowstreet Capital were also bullish on Stepan Company (NYSE:SCL), allocating a large percentage of their portfolios to this stock.

As industrywide interest jumped, specific money managers were leading the bulls’ herd. Holocene Advisors, managed by Brandon Haley, established the most valuable position in Stepan Company (NYSE:SCL). Holocene Advisors had $0.4 million invested in the company at the end of the quarter. Benjamin A. Smith’s Laurion Capital Management also made a $0.3 million investment in the stock during the quarter.

As you can see these stocks had an average of 12.25 hedge funds with bullish positions and the average amount invested in these stocks was $41 million. That figure was $36 million in SCL’s case. Crescent Point Energy Corp (NYSE:CPG) is the most popular stock in this table. On the other hand Coca-Cola Consolidated, Inc. (NASDAQ:COKE) is the least popular one with only 7 bullish hedge fund positions. Stepan Company (NYSE:SCL) is not the least popular stock in this group but hedge fund interest is still below average. Our calculations showed that top 15 most popular stocks) among hedge funds returned 24.2% through April 22nd and outperformed the S&P 500 ETF (SPY) by more than 7 percentage points. A small number of hedge funds were also right about betting on SCL, though not to the same extent, as the stock returned 20% and outperformed the market as well.