Many investors, including Paul Tudor Jones or Stan Druckenmiller, have been saying for a while now that the current market is overvalued due to a low interest rate environment that leads to companies swapping their equity for debt and focusing mostly on short-term performance such as beating the quarterly earnings estimates. In the fourth quarter, many investors lost money due to unpredictable events such as the sudden increase in long-term interest rates and unintended consequences of the trade war with China. Nevertheless, many of the stocks that tanked in the third quarter still sport strong fundamentals and their decline was more related to the general market sentiment rather than their individual performance and hedge funds kept their bullish stance. In this article we will find out how hedge fund sentiment to Stanley Black & Decker, Inc. (NYSE:SWK) changed recently.

Stanley Black & Decker, Inc. (NYSE:SWK) has experienced a decrease in enthusiasm from smart money recently. Our calculations also showed that swk isn’t among the 30 most popular stocks among hedge funds.

What does the smart money think about Stanley Black & Decker, Inc. (NYSE:SWK)?

At the end of the third quarter, a total of 27 of the hedge funds tracked by Insider Monkey were long this stock, a change of -16% from the second quarter of 2018. On the other hand, there were a total of 37 hedge funds with a bullish position in SWK at the beginning of this year. With the smart money’s positions undergoing their usual ebb and flow, there exists a select group of notable hedge fund managers who were upping their holdings substantially (or already accumulated large positions). 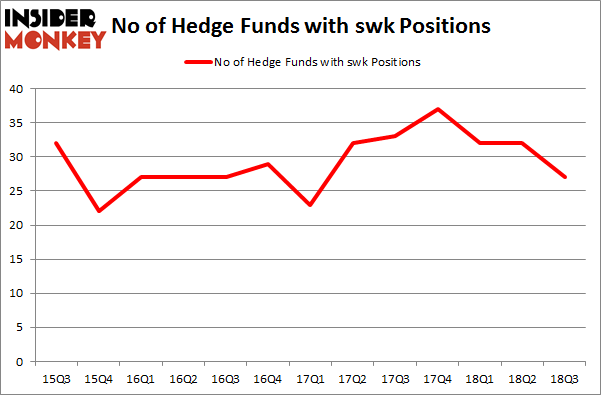 Among these funds, Ariel Investments held the most valuable stake in Stanley Black & Decker, Inc. (NYSE:SWK), which was worth $96.3 million at the end of the third quarter. On the second spot was Interval Partners which amassed $62.2 million worth of shares. Moreover, Pzena Investment Management, AQR Capital Management, and Interval Partners were also bullish on Stanley Black & Decker, Inc. (NYSE:SWK), allocating a large percentage of their portfolios to this stock.

Judging by the fact that Stanley Black & Decker, Inc. (NYSE:SWK) has faced a decline in interest from the smart money, it’s safe to say that there was a specific group of hedgies that decided to sell off their full holdings in the third quarter. Intriguingly, Jim Simons’s Renaissance Technologies dropped the largest stake of the 700 funds tracked by Insider Monkey, worth an estimated $48.2 million in stock. John Overdeck and David Siegel’s fund, Two Sigma Advisors, also dropped its stock, about $39.6 million worth. These transactions are important to note, as aggregate hedge fund interest dropped by 5 funds in the third quarter.

As you can see these stocks had an average of 33 hedge funds with bullish positions and the average amount invested in these stocks was $1.17 billion. That figure was $421 million in SWK’s case. Aptiv PLC (NYSE:APTV) is the most popular stock in this table. On the other hand Coca-Cola European Partners plc (NYSE:CCE) is the least popular one with only 23 bullish hedge fund positions. Stanley Black & Decker, Inc. (NYSE:SWK) is not the least popular stock in this group but hedge fund interest is still below average. This is a slightly negative signal and we’d rather spend our time researching stocks that hedge funds are piling on. In this regard APTV might be a better candidate to consider a long position.

Do Hedge Funds Love Manpowergroup Inc (MAN)?
Monthly Newsletter Strategy
Download a free copy of our newsletter and see the details inside!
Hedge Fund Resource Center
Related News
11 Fastest Growing Franchises in the US in 2018 Dividend Kings List For 2017 Is Stanley Black & Decker, Inc. (SWK) Going to Burn These Hedge Funds? Which Is the Better Valuation Metric? The P/E Ratio or the PEG Ratio: Part 1 Here’s Why Stanley Black & Decker, Celgene Corporation, and Three Other Stocks Are Trending Today Why Facebook, Sears Holdings, and Three Other Stocks Are Trending Today Earnings Results Have These 5 Stocks Turning Heads Today The 10 Best Islands to Visit in 2019 5 Most Socially Responsible Companies in America 5 Ways You Can Eliminate Credit Card Debt
Billionaire Hedge Funds