Is Stanley Black & Decker, Inc. (SWK) A Good Stock To Buy According To Hedge Funds?

Stanley Black & Decker, Inc. (NYSE:SWK) has experienced an increase in activity from the world’s largest hedge funds lately. Our calculations also showed that SWK isn’t among the 30 most popular stocks among hedge funds.

How have hedgies been trading Stanley Black & Decker, Inc. (NYSE:SWK)? 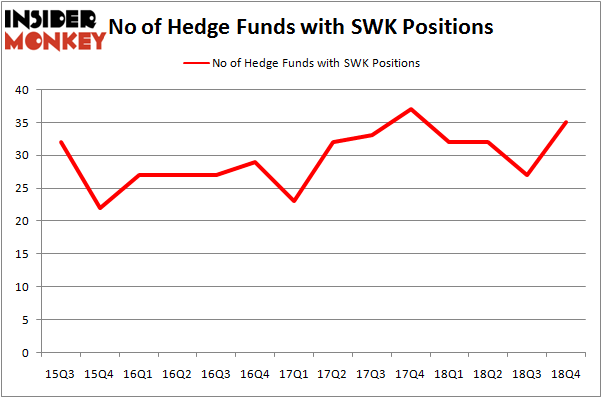 Among these funds, Citadel Investment Group held the most valuable stake in Stanley Black & Decker, Inc. (NYSE:SWK), which was worth $249 million at the end of the third quarter. On the second spot was Pzena Investment Management which amassed $148 million worth of shares. Moreover, Ariel Investments, Theleme Partners, and Interval Partners were also bullish on Stanley Black & Decker, Inc. (NYSE:SWK), allocating a large percentage of their portfolios to this stock.

As you can see these stocks had an average of 38.25 hedge funds with bullish positions and the average amount invested in these stocks was $2829 million. That figure was $822 million in SWK’s case. TransDigm Group Incorporated (NYSE:TDG) is the most popular stock in this table. On the other hand Verisk Analytics, Inc. (NASDAQ:VRSK) is the least popular one with only 30 bullish hedge fund positions. Stanley Black & Decker, Inc. (NYSE:SWK) is not the least popular stock in this group but hedge fund interest is still below average. This is a slightly negative signal and we’d rather spend our time researching stocks that hedge funds are piling on. Our calculations showed that top 15 most popular stocks among hedge funds returned 19.7% through March 15th and outperformed the S&P 500 ETF (SPY) by 6.6 percentage points. Unfortunately SWK wasn’t in this group. Hedge funds that bet on SWK were disappointed as the stock returned 10.2% and underperformed the market. If you are interested in investing in large cap stocks, you should check out the top 15 hedge fund stocks as 13 of these outperformed the market.

Here is What Hedge Funds Think About AutoZone Inc. (AZO)
Monthly Newsletter Strategy
Download a free copy of our newsletter and see the details inside!
Hedge Fund Resource Center
Related News
Is Stanley Black & Decker, Inc. (SWK) A Good Stock To Buy? 11 Fastest Growing Franchises in the US in 2018 Dividend Kings List For 2017 Is Stanley Black & Decker, Inc. (SWK) Going to Burn These Hedge Funds? Which Is the Better Valuation Metric? The P/E Ratio or the PEG Ratio: Part 1 Here’s Why Stanley Black & Decker, Celgene Corporation, and Three Other Stocks Are Trending Today Why Facebook, Sears Holdings, and Three Other Stocks Are Trending Today Ten of the Most Common Addictions 13 African Countries with the Largest White Population in 2018 6 Causes of Human Trafficking in Africa, India, and US
Billionaire Hedge Funds