Is Splunk Inc (SPLK) Going to Burn These Hedge Funds?

The fourth quarter was a rough one for most investors, as fears of a rising interest rate environment in the U.S, a trade war with China, and a more or less stagnant Europe, weighed heavily on the minds of investors. Both the S&P 500 and Russell 2000 sank as a result, with the Russell 2000, which is composed of smaller companies, being hit especially hard. This was primarily due to hedge funds, which are big supporters of small-cap stocks, pulling some of their capital out of the volatile markets during this time. Let’s look at how this market volatility affected the sentiment of hedge funds towards Splunk Inc (NASDAQ:SPLK), and what that likely means for the prospects of the company and its stock.

Splunk Inc (NASDAQ:SPLK) was in 39 hedge funds’ portfolios at the end of the third quarter of 2018. SPLK investors should pay attention to an increase in activity from the world’s largest hedge funds recently. There were 35 hedge funds in our database with SPLK positions at the end of the previous quarter. Our calculations also showed that SPLK isn’t among the 30 most popular stocks among hedge funds.

To most shareholders, hedge funds are perceived as underperforming, old financial vehicles of the past. While there are over 8,000 funds with their doors open at present, Our researchers choose to focus on the bigwigs of this group, around 700 funds. These hedge fund managers administer the lion’s share of the hedge fund industry’s total asset base, and by keeping an eye on their top investments, Insider Monkey has formulated various investment strategies that have historically surpassed the market. Insider Monkey’s flagship hedge fund strategy outpaced the S&P 500 index by 6 percentage points per annum since its inception in May 2014 through early November 2018. We were able to generate large returns even by identifying short candidates. Our portfolio of short stocks lost 24% since February 2017 (through December 3rd) even though the market was up nearly 23% during the same period. We just shared a list of 11 short targets in our latest quarterly update.

Heading into the fourth quarter of 2018, a total of 39 of the hedge funds tracked by Insider Monkey were long this stock, a change of 11% from the previous quarter. Below, you can check out the change in hedge fund sentiment towards SPLK over the last 13 quarters. With hedgies’ capital changing hands, there exists a select group of key hedge fund managers who were adding to their stakes significantly (or already accumulated large positions). 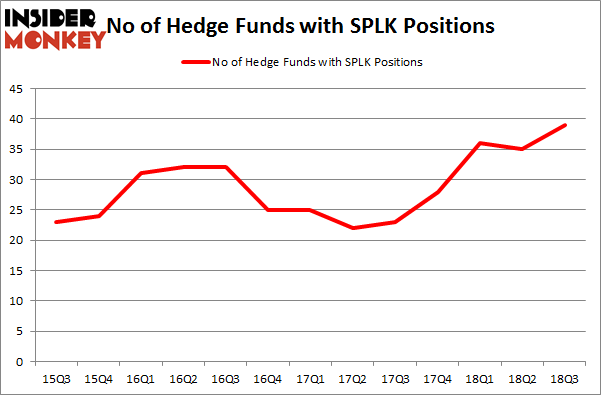 More specifically, Two Sigma Advisors was the largest shareholder of Splunk Inc (NASDAQ:SPLK), with a stake worth $179.8 million reported as of the end of September. Trailing Two Sigma Advisors was D E Shaw, which amassed a stake valued at $143.3 million. Arrowstreet Capital, Holocene Advisors, and Jericho Capital Asset Management were also very fond of the stock, giving the stock large weights in their portfolios.

As aggregate interest increased, some big names have been driving this bullishness. Holocene Advisors, managed by Brandon Haley, established the most outsized position in Splunk Inc (NASDAQ:SPLK). Holocene Advisors had $95.3 million invested in the company at the end of the quarter. Brandon Haley’s Holocene Advisors also made a $30.8 million investment in the stock during the quarter. The following funds were also among the new SPLK investors: Christopher Lord’s Criterion Capital, Andrew Weiss’s Weiss Asset Management, and Michael A. Price and Amos Meron’s Empyrean Capital Partners.

As you can see these stocks had an average of 19.5 hedge funds with bullish positions and the average amount invested in these stocks was $659 million. That figure was $901 million in SPLK’s case. BioMarin Pharmaceutical Inc. (NASDAQ:BMRN) is the most popular stock in this table. On the other hand Spectra Energy Partners, LP (NYSE:SEP) is the least popular one with only 5 bullish hedge fund positions. Splunk Inc (NASDAQ:SPLK) is not the most popular stock in this group but hedge fund interest is still above average. This is a slightly positive signal but we’d rather spend our time researching stocks that hedge funds are piling on. In this regard BMRN might be a better candidate to consider a long position.