Spirit Realty Capital Inc (NYSE:SRC) was in 23 hedge funds’ portfolios at the end of the second quarter of 2019. SRC has experienced an increase in support from the world’s most elite money managers in recent months. There were 17 hedge funds in our database with SRC holdings at the end of the previous quarter. Our calculations also showed that SRC isn’t among the 30 most popular stocks among hedge funds (view the video below).

Heading into the third quarter of 2019, a total of 23 of the hedge funds tracked by Insider Monkey held long positions in this stock, a change of 35% from the previous quarter. On the other hand, there were a total of 29 hedge funds with a bullish position in SRC a year ago. With the smart money’s sentiment swirling, there exists a few key hedge fund managers who were boosting their stakes substantially (or already accumulated large positions). 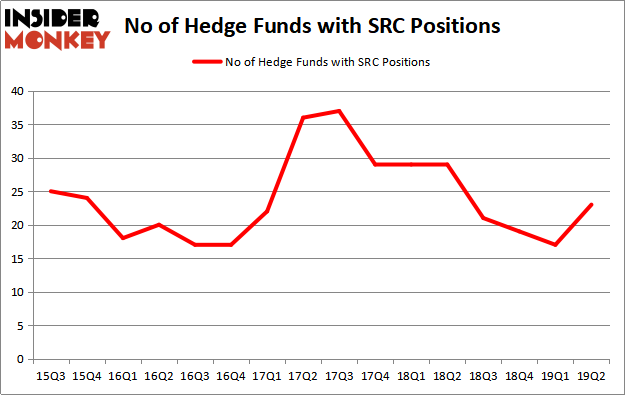 Among these funds, Scopia Capital held the most valuable stake in Spirit Realty Capital Inc (NYSE:SRC), which was worth $115 million at the end of the second quarter. On the second spot was Long Pond Capital which amassed $77.3 million worth of shares. Moreover, Renaissance Technologies, Citadel Investment Group, and Echo Street Capital Management were also bullish on Spirit Realty Capital Inc (NYSE:SRC), allocating a large percentage of their portfolios to this stock.

As industrywide interest jumped, some big names were leading the bulls’ herd. Millennium Management, managed by Israel Englander, assembled the biggest position in Spirit Realty Capital Inc (NYSE:SRC). Millennium Management had $24.6 million invested in the company at the end of the quarter. Steven Tananbaum’s GoldenTree Asset Management also made a $23.3 million investment in the stock during the quarter. The other funds with brand new SRC positions are Clint Carlson’s Carlson Capital, Ira Unschuld’s Brant Point Investment Management, and Daniel Johnson’s Gillson Capital.

As you can see these stocks had an average of 12.75 hedge funds with bullish positions and the average amount invested in these stocks was $152 million. That figure was $429 million in SRC’s case. J2 Global Inc (NASDAQ:JCOM) is the most popular stock in this table. On the other hand Ita? CorpBanca (NYSE:ITCB) is the least popular one with only 1 bullish hedge fund positions. Spirit Realty Capital Inc (NYSE:SRC) is not the most popular stock in this group but hedge fund interest is still above average. Our calculations showed that top 20 most popular stocks among hedge funds returned 24.4% in 2019 through September 30th and outperformed the S&P 500 ETF (SPY) by 4 percentage points. Hedge funds were also right about betting on SRC as the stock returned 13.6% during the third quarter and outperformed the market. Hedge funds were rewarded for their relative bullishness.