Is Spirit MTA REIT (SMTA) A Good Stock To Buy?

Amid an overall bull market, many stocks that smart money investors were collectively bullish on surged through the end of November. Among them, Facebook and Microsoft ranked among the top 3 picks and these stocks gained 54% and 51% respectively. Our research shows that most of the stocks that smart money likes historically generate strong risk-adjusted returns. That’s why we weren’t surprised when hedge funds’ top 20 large-cap stock picks generated a return of 37.4% through the end of November and outperformed the broader market benchmark by 9.9 percentage points. This is why following the smart money sentiment is a useful tool at identifying the next stock to invest in.

Spirit MTA REIT (NYSE:SMTA) investors should be aware of a decrease in enthusiasm from smart money lately. SMTA was in 17 hedge funds’ portfolios at the end of September. There were 19 hedge funds in our database with SMTA holdings at the end of the previous quarter. Our calculations also showed that SMTA isn’t among the 30 most popular stocks among hedge funds (click for Q3 rankings and see the video below for Q2 rankings).

Today there are a multitude of gauges stock traders use to appraise stocks. A duo of the less known gauges are hedge fund and insider trading interest. We have shown that, historically, those who follow the top picks of the top money managers can outpace the broader indices by a solid amount (see the details here).

We leave no stone unturned when looking for the next great investment idea. For example Europe is set to become the world’s largest cannabis market, so we check out this European marijuana stock pitch. One of the most bullish analysts in America just put his money where his mouth is. He says, “I’m investing more today than I did back in early 2009.” So we check out his pitch. We read hedge fund investor letters and listen to stock pitches at hedge fund conferences. We also rely on the best performing hedge funds‘ buy/sell signals. Let’s take a gander at the key hedge fund action regarding Spirit MTA REIT (NYSE:SMTA).

What does smart money think about Spirit MTA REIT (NYSE:SMTA)? 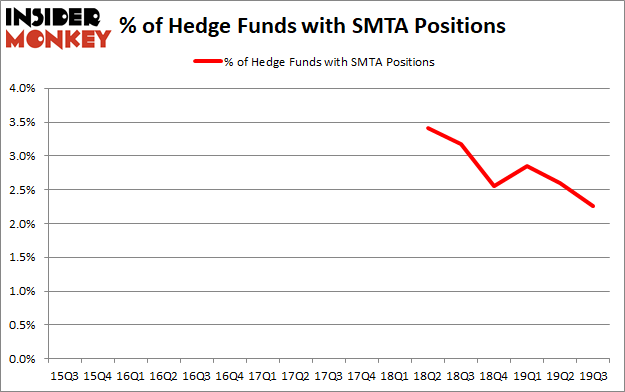 Among these funds, Indaba Capital Management held the most valuable stake in Spirit MTA REIT (NYSE:SMTA), which was worth $35.7 million at the end of the third quarter. On the second spot was Weiss Asset Management which amassed $33 million worth of shares. Mangrove Partners, Millennium Management, and Echo Street Capital Management were also very fond of the stock, becoming one of the largest hedge fund holders of the company. In terms of the portfolio weights assigned to each position, Snow Park Capital Partners allocated the biggest weight to Spirit MTA REIT (NYSE:SMTA), around 23.97% of its 13F portfolio. Indaba Capital Management is also relatively very bullish on the stock, setting aside 8.34 percent of its 13F equity portfolio to SMTA.

Since Spirit MTA REIT (NYSE:SMTA) has experienced declining sentiment from the entirety of the hedge funds we track, it’s safe to say that there lies a certain “tier” of funds who were dropping their entire stakes in the third quarter. It’s worth mentioning that David Rosen’s Rubric Capital Management sold off the biggest position of the 750 funds monitored by Insider Monkey, comprising close to $15.4 million in stock. Tom Wagner and Ara Cohen’s fund, Knighthead Capital, also dropped its stock, about $10.7 million worth. These moves are intriguing to say the least, as aggregate hedge fund interest was cut by 2 funds in the third quarter.

As you can see these stocks had an average of 5.25 hedge funds with bullish positions and the average amount invested in these stocks was $24 million. That figure was $114 million in SMTA’s case. ImmunoGen, Inc. (NASDAQ:IMGN) is the most popular stock in this table. On the other hand, Majesco (NYSE:MJCO) is the least popular one with only 2 bullish hedge fund positions. Compared to these stocks Spirit MTA REIT (NYSE:SMTA) is more popular among hedge funds. Our calculations showed that top 20 most popular stocks among hedge funds returned 37.4% in 2019 through the end of November and outperformed the S&P 500 ETF (SPY) by 9.9 percentage points. Hedge funds were also right about betting on SMTA as the stock returned 19.2% during the first two months of Q4 and outperformed the market by an even larger margin. Hedge funds were clearly right about piling into this stock relative to other stocks with similar market capitalizations.