How do you pick the next stock to invest in? One way would be to spend days of research browsing through thousands of publicly traded companies. However, an easier way is to look at the stocks that smart money investors are collectively bullish on. Hedge funds and other institutional investors usually invest large amounts of capital and have to conduct due diligence while choosing their next pick. They don’t always get it right, but, on average, their stock picks historically generated strong returns after adjusting for known risk factors. With this in mind, let’s take a look at the recent hedge fund activity surrounding Sociedad Quimica y Minera de Chile S.A. (NYSE:SQM).

Sociedad Quimica y Minera de Chile S.A. (NYSE:SQM) has seen a decrease in support from the world’s most elite money managers in recent months. Our calculations also showed that SQM isn’t among the 30 most popular stocks among hedge funds (see the video below).

To most shareholders, hedge funds are assumed to be unimportant, old financial tools of yesteryear. While there are over 8000 funds trading at the moment, Our researchers choose to focus on the crème de la crème of this club, around 750 funds. These hedge fund managers shepherd most of the smart money’s total asset base, and by paying attention to their top stock picks, Insider Monkey has formulated various investment strategies that have historically defeated the S&P 500 index. Insider Monkey’s flagship hedge fund strategy beat the S&P 500 index by around 5 percentage points a year since its inception in May 2014. We were able to generate large returns even by identifying short candidates. Our portfolio of short stocks lost 25.7% since February 2017 (through September 30th) even though the market was up more than 33% during the same period. We just shared a list of 10 short targets in our latest quarterly update . 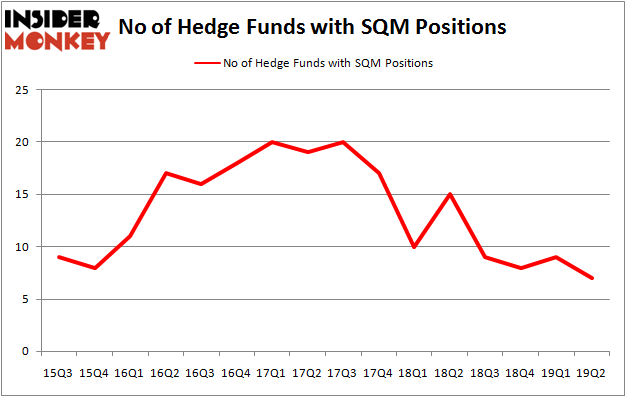 Of the funds tracked by Insider Monkey, Jonathan Barrett and Paul Segal’s Luminus Management has the largest position in Sociedad Quimica y Minera de Chile S.A. (NYSE:SQM), worth close to $10.1 million, amounting to 0.2% of its total 13F portfolio. On Luminus Management’s heels is Two Sigma Advisors, managed by John Overdeck and David Siegel, which holds a $9.4 million position; less than 0.1%% of its 13F portfolio is allocated to the company. Some other members of the smart money that hold long positions encompass Steve Cohen’s Point72 Asset Management, Israel Englander’s Millennium Management and Ken Griffin’s Citadel Investment Group.

Because Sociedad Quimica y Minera de Chile S.A. (NYSE:SQM) has experienced bearish sentiment from the aggregate hedge fund industry, it’s safe to say that there were a few money managers that slashed their full holdings last quarter. Interestingly, John Hempton’s Bronte Capital dropped the largest stake of the “upper crust” of funds followed by Insider Monkey, totaling an estimated $5.9 million in stock, and Louis Bacon’s Moore Global Investments was right behind this move, as the fund dumped about $5 million worth. These moves are important to note, as aggregate hedge fund interest was cut by 2 funds last quarter.

As you can see these stocks had an average of 19.75 hedge funds with bullish positions and the average amount invested in these stocks was $537 million. That figure was $23 million in SQM’s case. HollyFrontier Corporation (NYSE:HFC) is the most popular stock in this table. On the other hand Cognex Corporation (NASDAQ:CGNX) is the least popular one with only 13 bullish hedge fund positions. Compared to these stocks Sociedad Quimica y Minera de Chile S.A. (NYSE:SQM) is even less popular than CGNX. Hedge funds dodged a bullet by taking a bearish stance towards SQM. Our calculations showed that the top 20 most popular hedge fund stocks returned 24.4% in 2019 through September 30th and outperformed the S&P 500 ETF (SPY) by 4 percentage points. Unfortunately SQM wasn’t nearly as popular as these 20 stocks (hedge fund sentiment was very bearish); SQM investors were disappointed as the stock returned -9.7% during the third quarter and underperformed the market. If you are interested in investing in large cap stocks with huge upside potential, you should check out the top 20 most popular stocks among hedge funds as many of these stocks already outperformed the market so far in 2019.