Is Snap Inc (SNAP) A Good Stock To Buy According To Hedge Funds?

Snap Inc. (NYSE:SNAP) shares haven’t seen a lot of action during the third quarter. Overall, hedge fund sentiment was unchanged. The stock was in 17 hedge funds’ portfolios at the end of December. The level and the change in hedge fund popularity aren’t the only variables you need to analyze to decipher hedge funds’ perspectives. A stock may witness a boost in popularity but it may still be less popular than similarly priced stocks. That’s why at the end of this article we will examine companies such as Liberty Media Corporation (NASDAQ:FWONK), L Brands Inc (NYSE:LB), and Omega Healthcare Investors Inc (NYSE:OHI) to gather more data points.

We’re going to take a look at the latest hedge fund action regarding Snap Inc. (NYSE:SNAP).

How have hedgies been trading Snap Inc. (NYSE:SNAP)? 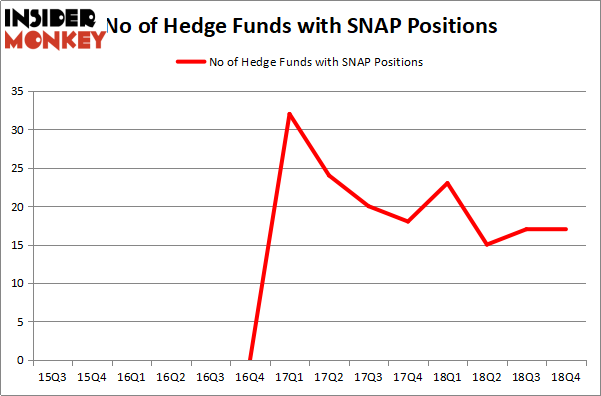 The largest stake in Snap Inc. (NYSE:SNAP) was held by Tybourne Capital Management, which reported holding $219.2 million worth of stock at the end of September. It was followed by Slate Path Capital with a $72.2 million position. Other investors bullish on the company included Citadel Investment Group, D E Shaw, and OZ Management.

Seeing as Snap Inc. (NYSE:SNAP) has witnessed a decline in interest from the aggregate hedge fund industry, it’s safe to say that there was a specific group of hedge funds that elected to cut their positions entirely in the third quarter. It’s worth mentioning that Lei Zhang’s Hillhouse Capital Management dropped the biggest investment of the “upper crust” of funds tracked by Insider Monkey, valued at an estimated $93.2 million in stock. Leon Shaulov’s fund, Maplelane Capital, also dumped its stock, about $5.5 million worth. These bearish behaviors are intriguing to say the least, as aggregate hedge fund interest stayed the same (this is a bearish signal in our experience).

As you can see these stocks had an average of 30.25 hedge funds with bullish positions and the average amount invested in these stocks was $782 million. That figure was $347 million in SNAP’s case. Okta, Inc. (NASDAQ:OKTA) is the most popular stock in this table. On the other hand Omega Healthcare Investors Inc (NYSE:OHI) is the least popular one with only 11 bullish hedge fund positions. Snap Inc. (NYSE:SNAP) is not the least popular stock in this group but hedge fund interest is still below average. Our calculations showed that top 15 most popular stocks among hedge funds returned 21.3% through April 8th and outperformed the S&P 500 ETF (SPY) by more than 5 percentage points. Seventeen hedge funds were also right about betting on SNAP as the stock returned 122.7% and outperformed the market by a huge margin. You can see the entire list of these shrewd hedge funds here.