Is SM Energy Company (NYSE:SM) a good investment right now? We check hedge fund and billionaire investor sentiment before delving into hours of research. Hedge funds spend millions of dollars on Ivy League graduates, expert networks, and get tips from investment bankers and industry insiders. Sure they sometimes fail miserably, but their consensus stock picks historically outperformed the market after adjusting for known risk factors.

SM Energy Company (NYSE:SM) has experienced a decrease in hedge fund sentiment recently. Our calculations also showed that SM isn’t among the 30 most popular stocks among hedge funds (see the video below).

Unlike former hedge manager, Dr. Steve Sjuggerud, who is convinced Dow will soar past 40000, our long-short investment strategy doesn’t rely on bull markets to deliver double digit returns. We only rely on hedge fund buy/sell signals. We’re going to take a gander at the key hedge fund action regarding SM Energy Company (NYSE:SM).

Heading into the third quarter of 2019, a total of 18 of the hedge funds tracked by Insider Monkey held long positions in this stock, a change of -14% from the first quarter of 2019. By comparison, 22 hedge funds held shares or bullish call options in SM a year ago. With the smart money’s sentiment swirling, there exists an “upper tier” of noteworthy hedge fund managers who were upping their stakes considerably (or already accumulated large positions). 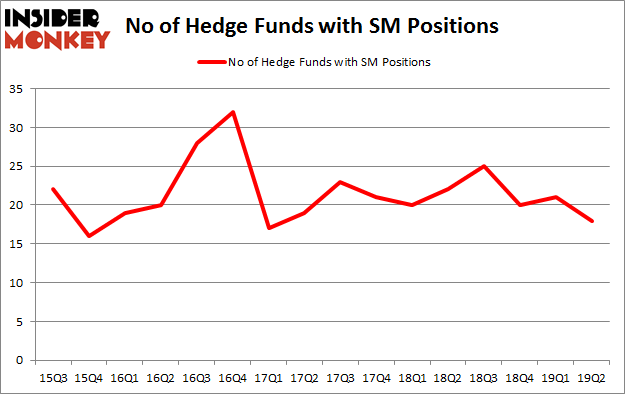 According to Insider Monkey’s hedge fund database, Israel Englander’s Millennium Management has the largest position in SM Energy Company (NYSE:SM), worth close to $77.9 million, amounting to 0.1% of its total 13F portfolio. The second most bullish fund manager is Citadel Investment Group, led by Ken Griffin, holding a $45.9 million position; less than 0.1%% of its 13F portfolio is allocated to the stock. Other hedge funds and institutional investors with similar optimism include Cliff Asness’s AQR Capital Management, D. E. Shaw’s D E Shaw and Renaissance Technologies.

Judging by the fact that SM Energy Company (NYSE:SM) has experienced declining sentiment from hedge fund managers, it’s safe to say that there were a few money managers who sold off their full holdings in the second quarter. Intriguingly, Jeffrey Tannenbaum’s Fir Tree dumped the largest position of the “upper crust” of funds tracked by Insider Monkey, totaling about $9.6 million in stock. Steve Cohen’s fund, Point72 Asset Management, also sold off its stock, about $7.9 million worth. These moves are important to note, as aggregate hedge fund interest was cut by 3 funds in the second quarter.