Is SINA Corp (SINA) A Good Stock To Buy?

Insider Monkey has processed numerous 13F filings of hedge funds and successful value investors to create an extensive database of hedge fund holdings. The 13F filings show the hedge funds’ and successful investors’ positions as of the end of the second quarter. You can find write-ups about an individual hedge fund’s trades on numerous financial news websites. However, in this article we will take a look at their collective moves and analyze what the smart money thinks of SINA Corp (NASDAQ:SINA) based on that data.

SINA Corp (NASDAQ:SINA) has experienced a decrease in hedge fund interest of late. Our calculations also showed that SINA isn’t among the 30 most popular stocks among hedge funds (view video below).

Today there are a large number of indicators stock market investors have at their disposal to analyze stocks. A pair of the most useful indicators are hedge fund and insider trading sentiment. Our experts have shown that, historically, those who follow the top picks of the elite investment managers can outperform their index-focused peers by a superb margin (see the details here).

How have hedgies been trading SINA Corp (NASDAQ:SINA)? 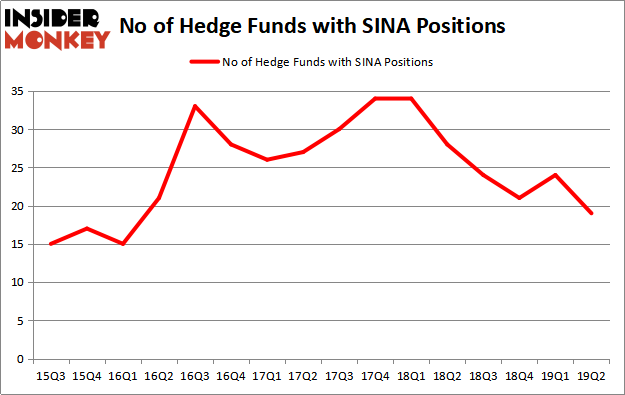 According to Insider Monkey’s hedge fund database, D. E. Shaw’s D E Shaw has the biggest position in SINA Corp (NASDAQ:SINA), worth close to $77 million, accounting for 0.1% of its total 13F portfolio. Coming in second is HBK Investments, managed by David Costen Haley, which holds a $62.6 million position; the fund has 1.1% of its 13F portfolio invested in the stock. Other peers that are bullish comprise Charles de Vaulx’s International Value Advisers, Noam Gottesman’s GLG Partners and Kerr Neilson’s Platinum Asset Management.

Due to the fact that SINA Corp (NASDAQ:SINA) has experienced declining sentiment from the smart money, it’s safe to say that there lies a certain “tier” of fund managers who were dropping their entire stakes in the second quarter. Intriguingly, Larry Chen and Terry Zhang’s Tairen Capital dumped the biggest stake of the 750 funds followed by Insider Monkey, totaling an estimated $67.1 million in stock, and Renaissance Technologies was right behind this move, as the fund cut about $34.1 million worth. These transactions are interesting, as aggregate hedge fund interest fell by 5 funds in the second quarter.

As you can see these stocks had an average of 20.75 hedge funds with bullish positions and the average amount invested in these stocks was $318 million. That figure was $314 million in SINA’s case. FireEye Inc (NASDAQ:FEYE) is the most popular stock in this table. On the other hand Acadia Healthcare Company Inc (NASDAQ:ACHC) is the least popular one with only 17 bullish hedge fund positions. SINA Corp (NASDAQ:SINA) is not the least popular stock in this group but hedge fund interest is still below average. This is a slightly negative signal and we’d rather spend our time researching stocks that hedge funds are piling on. Our calculations showed that top 20 most popular stocks among hedge funds returned 24.4% in 2019 through September 30th and outperformed the S&P 500 ETF (SPY) by 4 percentage points. Unfortunately SINA wasn’t nearly as popular as these 20 stocks (hedge fund sentiment was quite bearish); SINA investors were disappointed as the stock returned -9.1% during the third quarter and underperformed the market. If you are interested in investing in large cap stocks with huge upside potential, you should check out the top 20 most popular stocks among hedge funds as many of these stocks already outperformed the market so far in 2019.