The government requires hedge funds and wealthy investors that crossed the $100 million equity holdings threshold are required to file a report that shows their positions at the end of every quarter. Even though it isn’t the intention, these filings level the playing field for ordinary investors. The latest round of 13F filings disclosed the funds’ positions on December 31. We at Insider Monkey have made an extensive database of nearly 750 of those elite funds and prominent investors’ filings. In this article, we analyze how these elite funds and prominent investors traded Simpson Manufacturing Co, Inc. (NYSE:SSD) based on those filings.

Hedge fund interest in Simpson Manufacturing Co, Inc. (NYSE:SSD) shares was flat at the end of last quarter. This is usually a negative indicator. The level and the change in hedge fund popularity aren’t the only variables you need to analyze to decipher hedge funds’ perspectives. A stock may witness a boost in popularity but it may still be less popular than similarly priced stocks. That’s why at the end of this article we will examine companies such as Valmont Industries, Inc. (NYSE:VMI), CNO Financial Group Inc (NYSE:CNO), and Colfax Corporation (NYSE:CFX) to gather more data points. 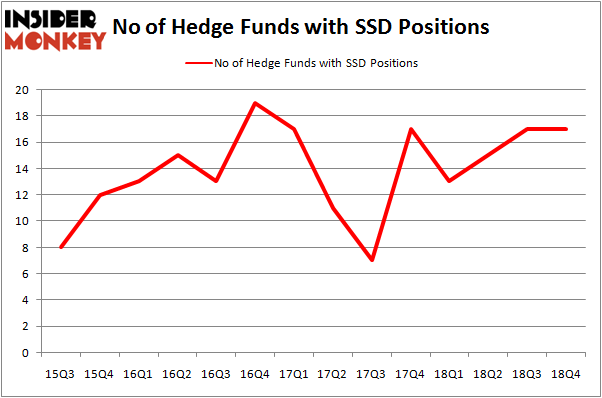 The largest stake in Simpson Manufacturing Co, Inc. (NYSE:SSD) was held by Ariel Investments, which reported holding $99.3 million worth of stock at the end of September. It was followed by Royce & Associates with a $38.7 million position. Other investors bullish on the company included Millennium Management, Renaissance Technologies, and Citadel Investment Group.

Due to the fact that Simpson Manufacturing Co, Inc. (NYSE:SSD) has experienced a decline in interest from hedge fund managers, it’s easy to see that there exists a select few funds that decided to sell off their entire stakes by the end of the third quarter. Interestingly, Ed Bosek’s BeaconLight Capital sold off the biggest stake of the “upper crust” of funds tracked by Insider Monkey, totaling close to $11.7 million in stock. Peter Rathjens, Bruce Clarke and John Campbell’s fund, Arrowstreet Capital, also dumped its stock, about $6 million worth. These bearish behaviors are interesting, as aggregate hedge fund interest stayed the same (this is a bearish signal in our experience).

As you can see these stocks had an average of 17.25 hedge funds with bullish positions and the average amount invested in these stocks was $176 million. That figure was $190 million in SSD’s case. Colfax Corporation (NYSE:CFX) is the most popular stock in this table. On the other hand CNO Financial Group Inc (NYSE:CNO) is the least popular one with only 11 bullish hedge fund positions. Simpson Manufacturing Co, Inc. (NYSE:SSD) is not the least popular stock in this group but hedge fund interest is still below average. This is a slightly negative signal and we’d rather spend our time researching stocks that hedge funds are piling on. Our calculations showed that top 15 most popular stocks) among hedge funds returned 24.2% through April 22nd and outperformed the S&P 500 ETF (SPY) by more than 7 percentage points. Unfortunately SSD wasn’t nearly as popular as these 15 stock (hedge fund sentiment was quite bearish); SSD investors were disappointed as the stock returned 16.5% and underperformed the market. If you are interested in investing in large cap stocks with huge upside potential, you should check out the top 15 most popular stocks) among hedge funds as 13 of these stocks already outperformed the market this year.