Does Shell Midstream Partners LP (NYSE:SHLX) represent a good buying opportunity at the moment? Let’s briefly check the hedge fund interest towards the company. Hedge fund firms constantly search out bright intellectuals and highly-experienced employees and throw away millions of dollars on research activities, so it is no wonder why they tend to generate millions in profits each year. It is also true that some hedge fund players fail inconceivably on some occasions, but their stock picks have been generating superior risk-adjusted returns on average over the years.

Is Shell Midstream Partners LP (NYSE:SHLX) the right pick for your portfolio? The best stock pickers are becoming less hopeful. The number of bullish hedge fund positions shrunk by 1 recently. Our calculations also showed that SHLX isn’t among the 30 most popular stocks among hedge funds.

At Q3’s end, a total of 6 of the hedge funds tracked by Insider Monkey held long positions in this stock, a change of -14% from the second quarter of 2018. The graph below displays the number of hedge funds with bullish position in SHLX over the last 13 quarters. With the smart money’s sentiment swirling, there exists a select group of notable hedge fund managers who were boosting their stakes substantially (or already accumulated large positions). 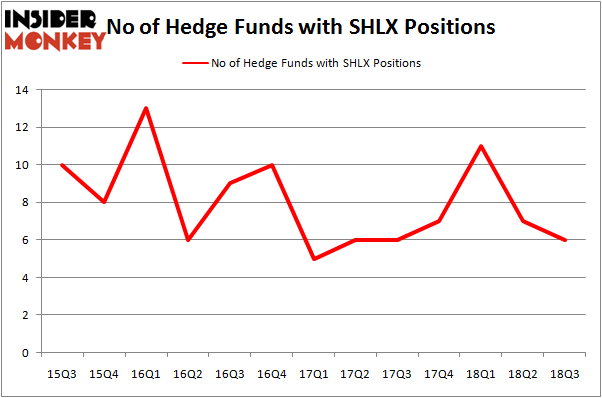 The largest stake in Shell Midstream Partners LP (NYSE:SHLX) was held by Zimmer Partners, which reported holding $10.7 million worth of stock at the end of September. It was followed by BP Capital with a $6 million position. Other investors bullish on the company included Citadel Investment Group, PEAK6 Capital Management, and Lucas Capital Management.

Judging by the fact that Shell Midstream Partners LP (NYSE:SHLX) has experienced a decline in interest from the smart money, it’s easy to see that there exists a select few money managers who were dropping their positions entirely heading into Q3. Interestingly, George Hall’s Clinton Group said goodbye to the largest stake of the 700 funds monitored by Insider Monkey, comprising an estimated $1 million in call options, and Ken Griffin’s Citadel Investment Group was right behind this move, as the fund dropped about $0.6 million worth. These transactions are interesting, as total hedge fund interest fell by 1 funds heading into Q3.

As you can see these stocks had an average of 24.75 hedge funds with bullish positions and the average amount invested in these stocks was $535 million. That figure was $24 million in SHLX’s case. Conduent Incorporated (NYSE:CNDT) is the most popular stock in this table. On the other hand 51job, Inc. (NASDAQ:JOBS) is the least popular one with only 14 bullish hedge fund positions. Compared to these stocks Shell Midstream Partners LP (NYSE:SHLX) is even less popular than JOBS. Considering that hedge funds aren’t fond of this stock in relation to other companies analyzed in this article, it may be a good idea to analyze it in detail and understand why the smart money isn’t behind this stock. This isn’t necessarily bad news. Although it is possible that hedge funds may think the stock is overpriced and view the stock as a short candidate, they may not be very familiar with the bullish thesis. In either case more research is warranted.