As we already know from media reports and hedge fund investor letters, hedge funds delivered their best returns in a decade. Most investors who decided to stick with hedge funds after a rough 2018 recouped their losses by the end of the second quarter. We get to see hedge funds’ thoughts towards the market and individual stocks by aggregating their quarterly portfolio movements and reading their investor letters. In this article, we will particularly take a look at what hedge funds think about SEI Investments Company (NASDAQ:SEIC).

SEI Investments Company (NASDAQ:SEIC) investors should pay attention to a decrease in enthusiasm from smart money lately. SEIC was in 22 hedge funds’ portfolios at the end of June. There were 24 hedge funds in our database with SEIC positions at the end of the previous quarter. Our calculations also showed that SEIC isn’t among the 30 most popular stocks among hedge funds (see the video below). 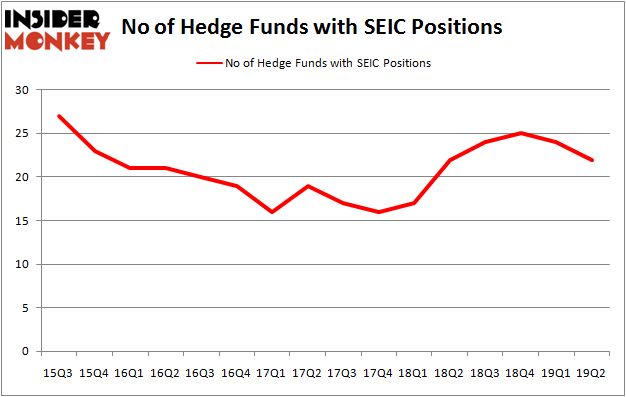 Unlike this former hedge fund manager who is convinced Dow will soar past 40000, our long-short investment strategy doesn’t rely on bull markets to deliver double digit returns. We only rely on hedge fund buy/sell signals. We’re going to take a peek at the fresh hedge fund action surrounding SEI Investments Company (NASDAQ:SEIC).

At the end of the second quarter, a total of 22 of the hedge funds tracked by Insider Monkey held long positions in this stock, a change of -8% from the first quarter of 2019. Below, you can check out the change in hedge fund sentiment towards SEIC over the last 16 quarters. So, let’s find out which hedge funds were among the top holders of the stock and which hedge funds were making big moves.

The largest stake in SEI Investments Company (NASDAQ:SEIC) was held by Citadel Investment Group, which reported holding $108.2 million worth of stock at the end of March. It was followed by Renaissance Technologies with a $62.8 million position. Other investors bullish on the company included Arrowstreet Capital, GLG Partners, and Royce & Associates.

Judging by the fact that SEI Investments Company (NASDAQ:SEIC) has witnessed falling interest from the entirety of the hedge funds we track, it’s easy to see that there exists a select few hedge funds who sold off their entire stakes in the second quarter. Interestingly, Peter Seuss’s Prana Capital Management sold off the largest position of the “upper crust” of funds followed by Insider Monkey, worth an estimated $4 million in stock. Paul Marshall and Ian Wace’s fund, Marshall Wace LLP, also cut its stock, about $2.3 million worth. These moves are intriguing to say the least, as total hedge fund interest fell by 2 funds in the second quarter.

As you can see these stocks had an average of 26.5 hedge funds with bullish positions and the average amount invested in these stocks was $914 million. That figure was $397 million in SEIC’s case. MongoDB, Inc. (NASDAQ:MDB) is the most popular stock in this table. On the other hand Service Corporation International (NYSE:SCI) is the least popular one with only 15 bullish hedge fund positions. SEI Investments Company (NASDAQ:SEIC) is not the least popular stock in this group but hedge fund interest is still below average. Our calculations showed that top 20 most popular stocks among hedge funds returned 24.4% in 2019 through September 30th and outperformed the S&P 500 ETF (SPY) by 4 percentage points. A small number of hedge funds were also right about betting on SEIC, though not to the same extent, as the stock returned 5.6% during the third quarter and outperformed the market.