Is SeaDrill Limited (SDRL) A Good Stock To Buy?

We can judge whether SeaDrill Limited (NYSE:SDRL) is a good investment right now by following the lead of some of the best investors in the world and piggybacking their ideas. There’s no better way to get these firms’ immense resources and analytical capabilities working for us than to follow their lead into their best ideas. While not all of these picks will be winners, our research shows that these picks historically outperformed the market when we factor in known risk factors.

Is SeaDrill Limited (NYSE:SDRL) going to take off soon? Money managers are in a pessimistic mood. The number of bullish hedge fund positions retreated by 2 lately. Our calculations also showed that SDRL isn’t among the 30 most popular stocks among hedge funds. SDRL was in 22 hedge funds’ portfolios at the end of the fourth quarter of 2018. There were 24 hedge funds in our database with SDRL holdings at the end of the previous quarter.

What have hedge funds been doing with SeaDrill Limited (NYSE:SDRL)? 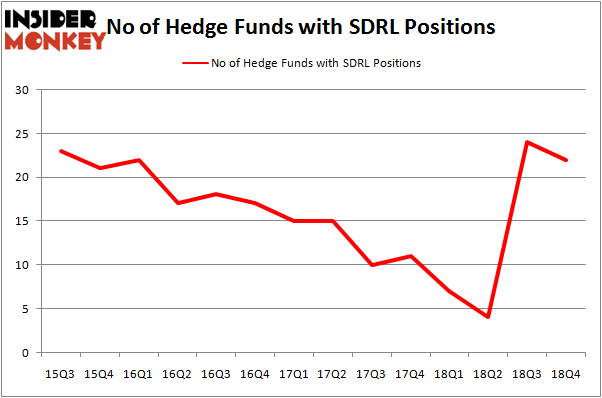 The largest stake in SeaDrill Limited (NYSE:SDRL) was held by Centerbridge Partners, which reported holding $76.6 million worth of stock at the end of December. It was followed by King Street Capital with a $64.9 million position. Other investors bullish on the company included Aristeia Capital, GLG Partners, and Odey Asset Management Group.

Because SeaDrill Limited (NYSE:SDRL) has experienced bearish sentiment from the aggregate hedge fund industry, it’s easy to see that there were a few hedge funds who were dropping their full holdings in the third quarter. Interestingly, Alex Snow’s Lansdowne Partners said goodbye to the largest investment of the “upper crust” of funds watched by Insider Monkey, valued at close to $23.3 million in stock, and Steve Cohen’s Point72 Asset Management was right behind this move, as the fund dumped about $3.1 million worth. These transactions are important to note, as total hedge fund interest dropped by 2 funds in the third quarter.