Is SAGE Therapeutics Inc (SAGE) A Good Stock To Buy?

SAGE Therapeutics Inc (NASDAQ:SAGE) investors should pay attention to a decrease in hedge fund interest of late. Our calculations also showed that sage isn’t among the 30 most popular stocks among hedge funds.

According to most shareholders, hedge funds are perceived as worthless, old financial tools of yesteryear. While there are more than 8000 funds in operation today, Our experts choose to focus on the top tier of this club, about 750 funds. These hedge fund managers command the majority of all hedge funds’ total asset base, and by paying attention to their matchless equity investments, Insider Monkey has unearthed several investment strategies that have historically outstripped the market. Insider Monkey’s flagship hedge fund strategy outstripped the S&P 500 index by around 5 percentage points per year since its inception in May 2014 through the end of May. We were able to generate large returns even by identifying short candidates. Our portfolio of short stocks lost 30.9% since February 2017 (through May 30th) even though the market was up nearly 24% during the same period. We just shared a list of 5 short targets in our latest quarterly update and they are already down an average of 11.9% in less than a couple of weeks whereas our long picks outperformed the market by 2 percentage points in this volatile 2 week period.

How have hedgies been trading SAGE Therapeutics Inc (NASDAQ:SAGE)? 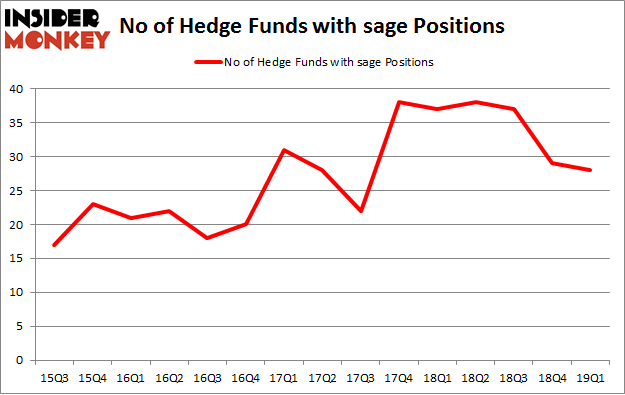 The largest stake in SAGE Therapeutics Inc (NASDAQ:SAGE) was held by Palo Alto Investors, which reported holding $136.4 million worth of stock at the end of March. It was followed by Farallon Capital with a $95.4 million position. Other investors bullish on the company included Casdin Capital, RA Capital Management, and Senator Investment Group.

Due to the fact that SAGE Therapeutics Inc (NASDAQ:SAGE) has witnessed falling interest from the aggregate hedge fund industry, we can see that there exists a select few fund managers who sold off their positions entirely heading into Q3. Interestingly, Steve Cohen’s Point72 Asset Management said goodbye to the biggest investment of all the hedgies monitored by Insider Monkey, valued at an estimated $24.6 million in call options. Dmitry Balyasny’s fund, Balyasny Asset Management, also sold off its call options, about $15.4 million worth. These moves are interesting, as aggregate hedge fund interest fell by 1 funds heading into Q3.

Let’s go over hedge fund activity in other stocks – not necessarily in the same industry as SAGE Therapeutics Inc (NASDAQ:SAGE) but similarly valued. These stocks are Formula One Group (NASDAQ:FWONK), The Interpublic Group of Companies Inc (NYSE:IPG), Farfetch Limited (NYSE:FTCH), and The Western Union Company (NYSE:WU). All of these stocks’ market caps match SAGE’s market cap.

As you can see these stocks had an average of 31 hedge funds with bullish positions and the average amount invested in these stocks was $903 million. That figure was $552 million in SAGE’s case. Farfetch Limited (NYSE:FTCH) is the most popular stock in this table. On the other hand The Western Union Company (NYSE:WU) is the least popular one with only 20 bullish hedge fund positions. SAGE Therapeutics Inc (NASDAQ:SAGE) is not the least popular stock in this group but hedge fund interest is still below average. Our calculations showed that top 20 most popular stocks among hedge funds returned 1.9% in Q2 through May 30th and outperformed the S&P 500 ETF (SPY) by more than 3 percentage points. A small number of hedge funds were also right about betting on SAGE as the stock returned 8.1% during the same time frame and outperformed the market by an even larger margin.