The first quarter was a breeze as Powell pivoted, and China seemed eager to reach a deal with Trump. Both the S&P 500 and Russell 2000 delivered very strong gains as a result, with the Russell 2000, which is composed of smaller companies, outperforming the large-cap stocks slightly during the first quarter. Unfortunately sentiment shifted in May and August as this time China pivoted and Trump put more pressure on China by increasing tariffs. Fourth quarter brought optimism to the markets and hedge funds’ top 20 stock picks performed spectacularly in this volatile environment. These stocks delivered a total gain of 37.4% through the end of November, vs. a gain of 27.5% for the S&P 500 ETF. In this article we will look at how this market volatility affected the sentiment of hedge funds towards Ryder System, Inc. (NYSE:R), and what that likely means for the prospects of the company and its stock.

Hedge fund interest in Ryder System, Inc. (NYSE:R) shares was flat at the end of last quarter. This is usually a negative indicator. At the end of this article we will also compare R to other stocks including Extended Stay America Inc (NASDAQ:STAY), Chesapeake Energy Corporation (NYSE:CHK), and Acadia Healthcare Company Inc (NASDAQ:ACHC) to get a better sense of its popularity.

Unlike the largest US hedge funds that are convinced Dow will soar past 40,000 or the world’s most bearish hedge fund that’s more convinced than ever that a crash is coming, our long-short investment strategy doesn’t rely on bull or bear markets to deliver double digit returns. We only rely on the best performing hedge funds‘ buy/sell signals. We’re going to go over the key hedge fund action surrounding Ryder System, Inc. (NYSE:R).

At Q3’s end, a total of 21 of the hedge funds tracked by Insider Monkey were bullish on this stock, a change of 0% from the second quarter of 2019. Below, you can check out the change in hedge fund sentiment towards R over the last 17 quarters. With the smart money’s positions undergoing their usual ebb and flow, there exists a select group of noteworthy hedge fund managers who were increasing their stakes significantly (or already accumulated large positions). 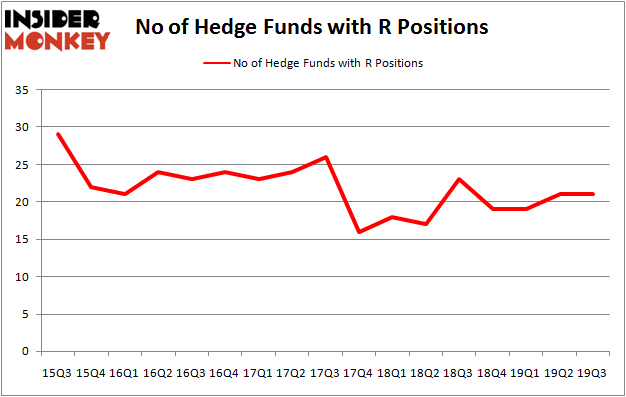 According to Insider Monkey’s hedge fund database, Pzena Investment Management, managed by Richard S. Pzena, holds the biggest position in Ryder System, Inc. (NYSE:R). Pzena Investment Management has a $137.6 million position in the stock, comprising 0.7% of its 13F portfolio. The second largest stake is held by Luminus Management, managed by Jonathan Barrett and Paul Segal, which holds a $120.6 million position; the fund has 3.5% of its 13F portfolio invested in the stock. Remaining peers that are bullish consist of Cliff Asness’s AQR Capital Management, Ken Griffin’s Citadel Investment Group and Peter Rathjens, Bruce Clarke and John Campbell’s Arrowstreet Capital. In terms of the portfolio weights assigned to each position Luminus Management allocated the biggest weight to Ryder System, Inc. (NYSE:R), around 3.49% of its 13F portfolio. Buckingham Capital Management is also relatively very bullish on the stock, dishing out 1.09 percent of its 13F equity portfolio to R.

Due to the fact that Ryder System, Inc. (NYSE:R) has experienced declining sentiment from hedge fund managers, it’s easy to see that there exists a select few hedgies who were dropping their full holdings in the third quarter. At the top of the heap, Dmitry Balyasny’s Balyasny Asset Management dropped the largest stake of the 750 funds monitored by Insider Monkey, worth about $5.7 million in stock. Noam Gottesman’s fund, GLG Partners, also dumped its stock, about $1.3 million worth. These moves are important to note, as aggregate hedge fund interest stayed the same (this is a bearish signal in our experience).

As you can see these stocks had an average of 20.5 hedge funds with bullish positions and the average amount invested in these stocks was $349 million. That figure was $356 million in R’s case. Extended Stay America Inc (NASDAQ:STAY) is the most popular stock in this table. On the other hand Chesapeake Energy Corporation (NYSE:CHK) is the least popular one with only 17 bullish hedge fund positions. Ryder System, Inc. (NYSE:R) is not the most popular stock in this group but hedge fund interest is still above average. This is a slightly positive signal but we’d rather spend our time researching stocks that hedge funds are piling on. Our calculations showed that top 20 most popular stocks among hedge funds returned 37.4% in 2019 through the end of November and outperformed the S&P 500 ETF (SPY) by 9.9 percentage points. Unfortunately R wasn’t nearly as popular as these 20 stocks and hedge funds that were betting on R were disappointed as the stock returned 2.5% during the fourth quarter (through the end of November) and underperformed the market. If you are interested in investing in large cap stocks with huge upside potential, you should check out the top 20 most popular stocks among hedge funds as many of these stocks already outperformed the market so far this year.