The financial regulations require hedge funds and wealthy investors that exceeded the $100 million equity holdings threshold to file a report that shows their positions at the end of every quarter. Even though it isn’t the intention, these filings to a certain extent level the playing field for ordinary investors. The latest round of 13F filings disclosed the funds’ positions on September 30th. We at Insider Monkey have made an extensive database of nearly 750 of those established hedge funds and famous value investors’ filings. In this article, we analyze how these elite funds and prominent investors traded RR Donnelley & Sons Company (NASDAQ:RRD) based on those filings.

Is RR Donnelley & Sons Company (NASDAQ:RRD) a bargain? Money managers are turning bullish. The number of long hedge fund bets increased by 3 in recent months. Our calculations also showed that RRD isn’t among the 30 most popular stocks among hedge funds (click for Q3 rankings and see the video below for Q2 rankings). RRD was in 15 hedge funds’ portfolios at the end of September. There were 12 hedge funds in our database with RRD positions at the end of the previous quarter.

We leave no stone unturned when looking for the next great investment idea. For example Europe is set to become the world’s largest cannabis market, so we check out this European marijuana stock pitch. One of the most bullish analysts in America just put his money where his mouth is. He says, “I’m investing more today than I did back in early 2009.” So we check out his pitch. We read hedge fund investor letters and listen to stock pitches at hedge fund conferences. We also rely on the best performing hedge funds‘ buy/sell signals. We’re going to take a gander at the key hedge fund action surrounding RR Donnelley & Sons Company (NASDAQ:RRD).

How have hedgies been trading RR Donnelley & Sons Company (NASDAQ:RRD)?

At Q3’s end, a total of 15 of the hedge funds tracked by Insider Monkey held long positions in this stock, a change of 25% from the second quarter of 2019. By comparison, 15 hedge funds held shares or bullish call options in RRD a year ago. With the smart money’s sentiment swirling, there exists a select group of notable hedge fund managers who were adding to their stakes considerably (or already accumulated large positions). 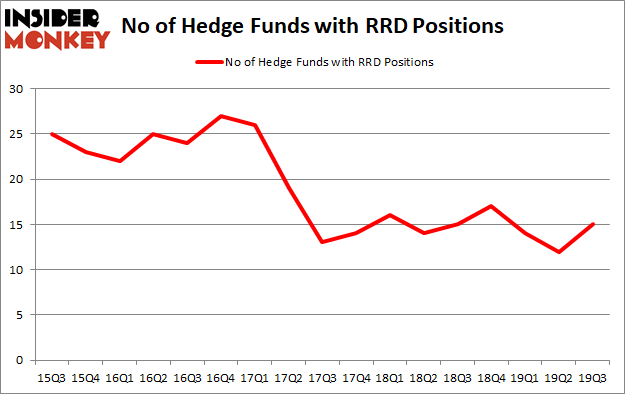 When looking at the institutional investors followed by Insider Monkey, Don Morgan’s Brigade Capital has the most valuable position in RR Donnelley & Sons Company (NASDAQ:RRD), worth close to $5.3 million, corresponding to 0.3% of its total 13F portfolio. The second most bullish fund manager is Whitebox Advisors, led by Andy Redleaf, holding a $4.8 million position; 0.2% of its 13F portfolio is allocated to the company. Other hedge funds and institutional investors with similar optimism include Boaz Weinstein’s Saba Capital, Ron Gutfleish’s Elm Ridge Capital and David E. Shaw’s D E Shaw. In terms of the portfolio weights assigned to each position Elm Ridge Capital allocated the biggest weight to RR Donnelley & Sons Company (NASDAQ:RRD), around 0.91% of its 13F portfolio. Brigade Capital is also relatively very bullish on the stock, dishing out 0.28 percent of its 13F equity portfolio to RRD.

As industrywide interest jumped, key hedge funds have been driving this bullishness. Citadel Investment Group, managed by Ken Griffin, assembled the biggest position in RR Donnelley & Sons Company (NASDAQ:RRD). Citadel Investment Group had $0.3 million invested in the company at the end of the quarter. Peter Rathjens, Bruce Clarke and John Campbell’s Arrowstreet Capital also made a $0.2 million investment in the stock during the quarter. The other funds with new positions in the stock are Michael Gelband’s ExodusPoint Capital and Michael Platt and William Reeves’s BlueCrest Capital Mgmt..

Let’s now take a look at hedge fund activity in other stocks – not necessarily in the same industry as RR Donnelley & Sons Company (NASDAQ:RRD) but similarly valued. We will take a look at Denison Mines Corp (NYSEAMEX:DNN), Scholar Rock Holding Corporation (NASDAQ:SRRK), Covia Holdings Corporation (NYSE:CVIA), and Avid Technology, Inc. (NASDAQ:AVID). All of these stocks’ market caps are closest to RRD’s market cap.

As you can see these stocks had an average of 7.75 hedge funds with bullish positions and the average amount invested in these stocks was $21 million. That figure was $16 million in RRD’s case. Avid Technology, Inc. (NASDAQ:AVID) is the most popular stock in this table. On the other hand Denison Mines Corp (NYSEAMEX:DNN) is the least popular one with only 3 bullish hedge fund positions. Compared to these stocks RR Donnelley & Sons Company (NASDAQ:RRD) is more popular among hedge funds. Our calculations showed that top 20 most popular stocks among hedge funds returned 37.4% in 2019 through the end of November and outperformed the S&P 500 ETF (SPY) by 9.9 percentage points. Hedge funds were also right about betting on RRD, though not to the same extent, as the stock returned 6.2% during the fourth quarter (through the end of November) and outperformed the market as well.

Is Corporate Office Properties Trust (OFC) A Good Stock To Buy?
Monthly Newsletter Strategy
Download a free copy of our newsletter and see the details inside!
Hedge Fund Resource Center
Related News
Is RR Donnelley & Sons Company (RRD) A Good Stock To Buy? Hedge Funds Are Crazy About RR Donnelley & Sons Company (RRD) Markets Snapshot: 34 Key Stories To Read About The Financial Markets Today Hedge Funds Are Selling RR Donnelley & Sons Co (RRD) Why Spectra Energy, Clorox, HollyFrontier and 2 More Are in the Limelight Breton Hill Goes on a Buying Spree: See What Stocks It Bought in Q2 Why Traders Are Talking About Expedia, Xerox, Priceline and 2 Other Stocks Today 10 Stocks That Went Up During The 2008 Crash 10 Movies About Amnesia on Netflix 20 Countries With Highest Military Spending In The World
Billionaire Hedge Funds