Is Royal Gold, Inc (RGLD) A Good Stock To Buy?

We at Insider Monkey have gone over 738 13F filings that hedge funds and prominent investors are required to file by the SEC The 13F filings show the funds’ and investors’ portfolio positions as of March 31st. In this article, we look at what those funds think of Royal Gold, Inc (NASDAQ:RGLD) based on that data.

Royal Gold, Inc (NASDAQ:RGLD) investors should pay attention to an increase in support from the world’s most elite money managers lately. Our calculations also showed that RGLD isn’t among the 30 most popular stocks among hedge funds.

How have hedgies been trading Royal Gold, Inc (NASDAQ:RGLD)?

Heading into the second quarter of 2019, a total of 17 of the hedge funds tracked by Insider Monkey were long this stock, a change of 13% from one quarter earlier. By comparison, 20 hedge funds held shares or bullish call options in RGLD a year ago. With the smart money’s sentiment swirling, there exists a few noteworthy hedge fund managers who were boosting their stakes meaningfully (or already accumulated large positions). 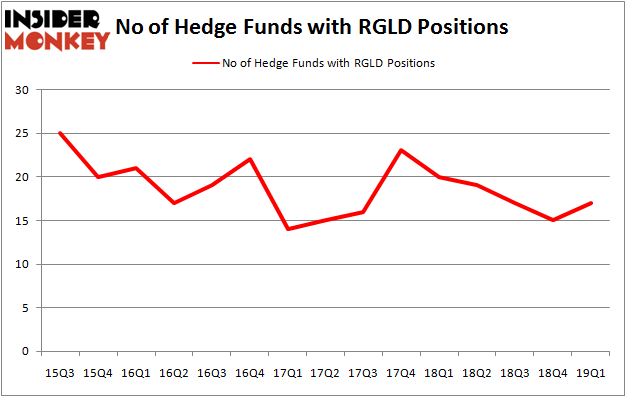 Now, key hedge funds were leading the bulls’ herd. Arrowgrass Capital Partners, managed by Nick Niell, assembled the biggest position in Royal Gold, Inc (NASDAQ:RGLD). Arrowgrass Capital Partners had $22.2 million invested in the company at the end of the quarter. Sander Gerber’s Hudson Bay Capital Management also made a $16.2 million investment in the stock during the quarter. The other funds with new positions in the stock are Ken Griffin’s Citadel Investment Group, David Harding’s Winton Capital Management, and Charles Davidson and Joseph Jacobs’s Wexford Capital.

As you can see these stocks had an average of 23 hedge funds with bullish positions and the average amount invested in these stocks was $608 million. That figure was $67 million in RGLD’s case. Axalta Coating Systems Ltd (NYSE:AXTA) is the most popular stock in this table. On the other hand Cree, Inc. (NASDAQ:CREE) is the least popular one with only 14 bullish hedge fund positions. Royal Gold, Inc (NASDAQ:RGLD) is not the least popular stock in this group but hedge fund interest is still below average. Our calculations showed that top 20 most popular stocks among hedge funds returned 6.2% in Q2 through June 19th and outperformed the S&P 500 ETF (SPY) by nearly 3 percentage points. A small number of hedge funds were also right about betting on RGLD as the stock returned 8.2% during the same time frame and outperformed the market by an even larger margin.

Hedge Funds Have Never Been This Bullish On The Brink’s Company (BCO)
Monthly Newsletter Strategy
Download a free copy of our newsletter and see the details inside!
Hedge Fund Resource Center
Related News
Were Hedge Funds Right About Souring On Royal Gold, Inc (RGLD)? Is Royal Gold, Inc. (NASDAQ:RGLD) Going to Burn These Hedge Funds? How Royal Gold, Inc (USA) (RGLD) Stacks Up Against Its Peers? Kopernik Global’s Bets On Gold Keep Paying Off Kopernik Global Investors Hits the Jackpot with Gold Bets in Q1 What’s the Deal With These 5 Surging Stocks? Five Gold Mining Stocks to Own Now 25 Biggest Activist Short Sellers in the Hedge Fund World 21 Best Tinder Bio Examples for Newly Single Moms 17 Best Excuses to Get Out of Work
Billionaire Hedge Funds