With the third-quarter round of 13F filings behind us it is time to take a look at the stocks in which some of the best money managers in the world preferred to invest or sell heading into the fourth quarter. One of these stocks was Royal Caribbean Cruises Ltd. (NYSE:RCL).

Royal Caribbean Cruises Ltd. (NYSE:RCL) was in 42 hedge funds’ portfolios at the end of the third quarter of 2018. RCL has experienced an increase in support from the world’s most elite money managers recently, though it widely missed our countdown of the 30 Most Popular Stocks Among Hedge Funds. However, it did fare far better among the 20 Dividend Stocks That Billionaires Are Piling On, ranking 17th. Billionaire money managers were extremely bullish on Royal Caribbean in Q3, as the value of their holdings nearly doubled to $1.09 billion.

At the moment there are several indicators market participants put to use to size up their stock investments. Two of the less utilized indicators are hedge fund and insider trading moves. Our experts have shown that, historically, those who follow the top picks of the elite money managers can trounce the market by a significant amount (see the details here). 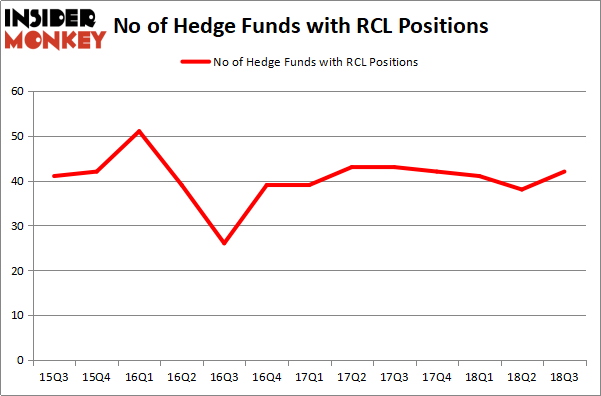 The largest stake in Royal Caribbean Cruises Ltd. (NYSE:RCL) was held by Citadel Investment Group, which reported holding $416.6 million worth of stock at the end of September. It was followed by Melvin Capital Management with a $210.9 million position. Other investors bullish on the company included D E Shaw, Millennium Management, and Point72 Asset Management.

As one would reasonably expect, key hedge funds have jumped into Royal Caribbean Cruises Ltd. (NYSE:RCL) headfirst. Highline Capital Management, managed by Jacob Doft, established the most valuable position in Royal Caribbean Cruises Ltd. (NYSE:RCL). Highline Capital Management had $104.9 million invested in the company at the end of the quarter. John Overdeck and David Siegel’s Two Sigma Advisors also made a $50.1 million investment in the stock during the quarter. The other funds with brand new RCL positions are Zach Schreiber’s Point State Capital, Robert Pohly’s Samlyn Capital, and Ryan Frick and Oliver Evans’ Dorsal Capital Management.

As you can see these stocks had an average of 24 hedge funds with bullish positions and the average amount invested in these stocks was $712 million. That figure was $2.21 billion in RCL’s case. Zimmer Biomet Holdings Inc (NYSE:ZBH) is the most popular stock in this table. On the other hand CRH PLC (NYSE:CRH) is the least popular one with only 7 bullish hedge fund positions. Compared to these stocks Royal Caribbean Cruises Ltd. (NYSE:RCL) is more popular among hedge funds. Considering that hedge funds are fond of this stock in relation to its market cap peers, it may be a good idea to analyze it in detail and potentially include it in your portfolio.

Here is What Hedge Funds Think About Movado Group, Inc (MOV)
Monthly Newsletter Strategy
Download a free copy of our newsletter and see the details inside!
Hedge Fund Resource Center
Related News
20 Dividend Stocks That Billionaires Are Piling On Will Cruise Stocks Sink Your Portfolio in 2018? Hedge Funds Are Dumping Royal Caribbean Cruises Ltd (RCL) Here’s Why These Five Stocks Are in Spotlight Today Bank of America (BAC), Royal Caribbean (RCL), and Southwest Airlines (LUV) Among 5 Companies With Intense Insider Trading Activity What’s Driving The Declines In These Stocks on Monday? Billionaire Julian Robertson’s Major Moves Ahead of Q2 The 10 Best Islands to Visit in 2019 5 Most Socially Responsible Companies in America 5 Ways You Can Eliminate Credit Card Debt
Billionaire Hedge Funds