While the market driven by short-term sentiment influenced by uncertainty regarding the future of the interest rate environment in the US, declining oil prices and the trade war with China, many smart money investors are keeping their optimism regarding the current bull run, while still hedging many of their long positions. However, as we know, big investors usually buy stocks with strong fundamentals, which is why we believe we can profit from imitating them. In this article, we are going to take a look at the smart money sentiment surrounding Rimini Street, Inc. (NASDAQ:RMNI).

Is Rimini Street, Inc. (NASDAQ:RMNI) a superb investment right now? Money managers are buying. The number of long hedge fund positions advanced by 2 in recent months, and the company was in 3 hedge funds’ portfolios at the end of the third quarter of 2018. With only 3 investors long the stock, the company was far away from being considered a popular stock (to see which stock have attracted the most attention from smart money managers, take a look at the 30 most popular stocks among ALL hedge funds.)

According to most stock holders, hedge funds are seen as worthless, outdated financial vehicles of the past. While there are more than 8000 funds with their doors open today, We choose to focus on the elite of this club, approximately 700 funds. These hedge fund managers administer most of the smart money’s total asset base, and by keeping track of their matchless equity investments, Insider Monkey has found a few investment strategies that have historically defeated the market. Insider Monkey’s flagship hedge fund strategy outperformed the S&P 500 index by 6 percentage points per year since its inception in May 2014 through early November 2018. We were able to generate large returns even by identifying short candidates. Our portfolio of short stocks lost 26.1% since February 2017 even though the market was up nearly 19% during the same period. We just shared a list of 11 short targets in our latest quarterly update.

While gathering more data about Rimini Street, Inc. (NASDAQ:RMNI), we stumbled upon Laughing Water Capital’s Quarterly Report, in which, this long biased boutique investment partnership shares its perspective on the company. We bring you a few parts from the report:

“In short, the company provides 3rd party maintenance for enterprise software. Their basic sales pitch to customers is, “we will save you 50% on your maintenance costs, while providing better service,” which is clearly attractive. Most often, they are undercutting Oracle, and not surprisingly, Oracle is attempting to litigate the company to death. It has been a wild few months for RMNI, with shares having rallied ~50% from our purchase price, only to decline to below our purchase price on news in mid-August that a Nevada court granted a permanent injunction against Rimini for infringing on Oracle’s copyrights. This “permanent” injunction lasted about a month, at which point it was stayed until the 9th Circuit Court of Appeals can hear Rimini’s appeal, and shares once again rallied significantly.”

“Importantly however, regardless if the injunction is vacated or not, I believe Rimini will be just fine. The company has already commented that if they were forced to comply with any injunction, it would impact gross margin by between 1-4% of sales. “

“It is too early to spend a lot of time thinking about these potential developments as legal concerns will rule the day in the near term, but zooming out and focusing on the big picture reveals that while we bought Rimini as a special situation, it has the potential to become a business that can compound wealth for decades. We added to our RMNI position on the recent weakness.” 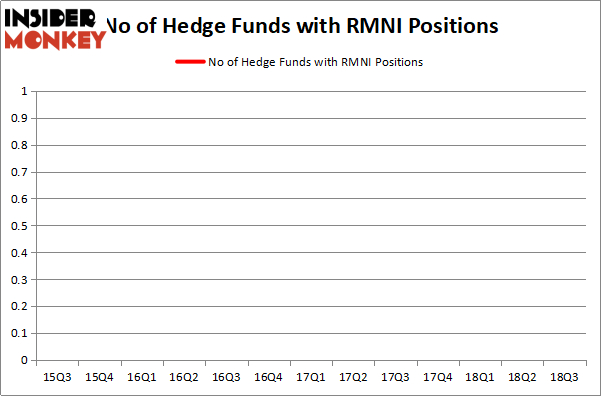 The largest stake in Rimini Street, Inc. (NASDAQ:RMNI) was held by Kingstown Capital Management, which reported holding $7.1 million worth of stock at the end of September. It was followed by Renaissance Technologies with a $0.3 million position. Other investor bullish on the company included Marshall Wace LLP.

With a general bullishness among the heavyweights, key money managers have been driving this bullishness. Renaissance Technologies, managed by Jim Simons, established the most valuable position in Rimini Street, Inc. (NASDAQ:RMNI). Renaissance Technologies had $0.3 million invested in the company at the end of the quarter. Paul Marshall and Ian Wace’s Marshall Wace LLP also made a $0.2 million investment in the stock during the quarter.

As you can see these stocks had an average of 8 hedge funds with bullish positions and the average amount invested in these stocks was $52 million. Albireo Pharma, Inc. (NASDAQ:ALBO) is the most popular stock in this table. On the other hand, BlackRock California Municipal Income Trust (NYSE:BFZ) is the least popular one with only 1 bullish hedge fund position. Even though Rimini Street, Inc. (NASDAQ:RMNI) is not the least popular stock in the group, the hedge fund interest is still below the average, which is why we would rather focus on more popular stocks. In this regard,  Albireo Pharma, Inc. (NASDAQ:ALBO) might be a better candidate to consider a long position.