Is Resources Connection, Inc. (RECN) A Good Stock To Buy?

Concerns over rising interest rates and expected further rate increases have hit several stocks hard during the fourth quarter. NASDAQ and Russell 2000 indices were already in correction territory. More importantly, Russell 2000 ETF (IWM) underperformed the larger S&P 500 ETF (SPY) by nearly 7 percentage points in the fourth quarter. Hedge funds and institutional investors tracked by Insider Monkey usually invest a disproportionate amount of their portfolios in smaller cap stocks. We have been receiving indications that hedge funds were paring back their overall exposure and this is one of the factors behind the recent movements in major indices. In this article, we will take a closer look at hedge fund sentiment towards Resources Connection, Inc. (NASDAQ:RECN).

Resources Connection, Inc. (NASDAQ:RECN) shares haven’t seen a lot of action during the third quarter. Overall, hedge fund sentiment was unchanged. The stock was in 13 hedge funds’ portfolios at the end of the fourth quarter of 2018. The level and the change in hedge fund popularity aren’t the only variables you need to analyze to decipher hedge funds’ perspectives. A stock may witness a boost in popularity but it may still be less popular than similarly priced stocks. That’s why at the end of this article we will examine companies such as Golden Entertainment Inc (NASDAQ:GDEN), Old Line Bancshares, Inc. (MD) (NASDAQ:OLBK), and Venator Materials PLC (NYSE:VNTR) to gather more data points.

What have hedge funds been doing with Resources Connection, Inc. (NASDAQ:RECN)?

At the end of the fourth quarter, a total of 13 of the hedge funds tracked by Insider Monkey were long this stock, a change of 0% from the second quarter of 2018. The graph below displays the number of hedge funds with bullish position in RECN over the last 14 quarters. With hedge funds’ positions undergoing their usual ebb and flow, there exists a select group of notable hedge fund managers who were boosting their stakes considerably (or already accumulated large positions). 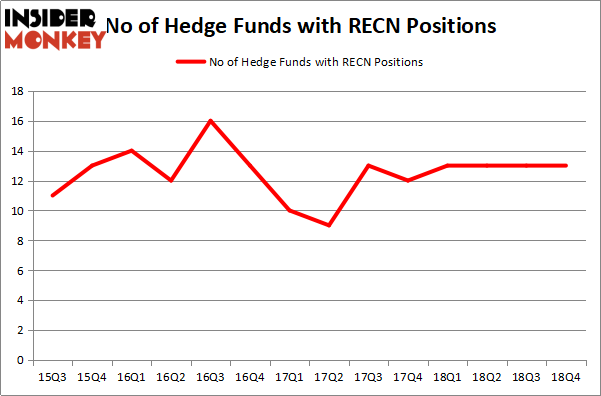 More specifically, Royce & Associates was the largest shareholder of Resources Connection, Inc. (NASDAQ:RECN), with a stake worth $20.8 million reported as of the end of December. Trailing Royce & Associates was Millennium Management, which amassed a stake valued at $4.1 million. Arrowstreet Capital, Renaissance Technologies, and Citadel Investment Group were also very fond of the stock, giving the stock large weights in their portfolios.

Seeing as Resources Connection, Inc. (NASDAQ:RECN) has faced bearish sentiment from the aggregate hedge fund industry, logic holds that there is a sect of money managers who sold off their entire stakes last quarter. It’s worth mentioning that David Harding’s Winton Capital Management dumped the largest position of the 700 funds watched by Insider Monkey, comprising about $0.7 million in stock, and D. E. Shaw’s D E Shaw was right behind this move, as the fund said goodbye to about $0.2 million worth. These transactions are interesting, as aggregate hedge fund interest stayed the same (this is a bearish signal in our experience).

As you can see these stocks had an average of 13 hedge funds with bullish positions and the average amount invested in these stocks was $68 million. That figure was $38 million in RECN’s case. Venator Materials PLC (NYSE:VNTR) is the most popular stock in this table. On the other hand Old Line Bancshares, Inc. (MD) (NASDAQ:OLBK) is the least popular one with only 9 bullish hedge fund positions. Resources Connection, Inc. (NASDAQ:RECN) is not the least popular stock in this group but hedge fund interest is still below average. This is a slightly negative signal and we’d rather spend our time researching stocks that hedge funds are piling on. Our calculations showed that top 15 most popular stocks) among hedge funds returned 24.2% through April 22nd and outperformed the S&P 500 ETF (SPY) by more than 7 percentage points. Unfortunately RECN wasn’t nearly as popular as these 15 stock (hedge fund sentiment was quite bearish); RECN investors were disappointed as the stock returned 12.8% and underperformed the market. If you are interested in investing in large cap stocks with huge upside potential, you should check out the top 15 most popular stocks) among hedge funds as 13 of these stocks already outperformed the market this year.