Did Hedge Funds Drop The Ball On ResMed Inc. (RMD) ?

After several tireless days we have finished crunching the numbers from nearly 750 13F filings issued by the elite hedge funds and other investment firms that we track at Insider Monkey, which disclosed those firms’ equity portfolios as of June 28. The results of that effort will be put on display in this article, as we share valuable insight into the smart money sentiment towards ResMed Inc. (NYSE:RMD).

Is ResMed Inc. (NYSE:RMD) the right investment to pursue these days? Investors who are in the know are taking a pessimistic view. The number of long hedge fund bets fell by 8 recently. Our calculations also showed that RMD isn’t among the 30 most popular stocks among hedge funds (view the video below). RMD was in 10 hedge funds’ portfolios at the end of the second quarter of 2019. There were 18 hedge funds in our database with RMD holdings at the end of the previous quarter.

Unlike some fund managers who are betting on Dow reaching 40000 in a year, our long-short investment strategy doesn’t rely on bull markets to deliver double digit returns. We only rely on hedge fund buy/sell signals. Let’s take a look at the new hedge fund action regarding ResMed Inc. (NYSE:RMD).

At the end of the second quarter, a total of 10 of the hedge funds tracked by Insider Monkey held long positions in this stock, a change of -44% from one quarter earlier. By comparison, 19 hedge funds held shares or bullish call options in RMD a year ago. With hedge funds’ capital changing hands, there exists a select group of noteworthy hedge fund managers who were boosting their stakes considerably (or already accumulated large positions). 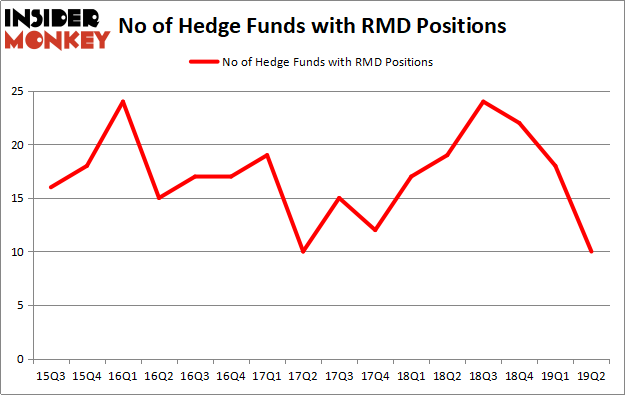 The largest stake in ResMed Inc. (NYSE:RMD) was held by AQR Capital Management, which reported holding $57 million worth of stock at the end of March. It was followed by Adage Capital Management with a $21.3 million position. Other investors bullish on the company included PDT Partners, Citadel Investment Group, and GLG Partners.

Since ResMed Inc. (NYSE:RMD) has faced a decline in interest from hedge fund managers, it’s easy to see that there lies a certain “tier” of funds that slashed their entire stakes by the end of the second quarter. It’s worth mentioning that Brian Ashford-Russell and Tim Woolley’s Polar Capital sold off the biggest stake of the 750 funds followed by Insider Monkey, valued at close to $11.4 million in stock. Matthew Tewksbury’s fund, Stevens Capital Management, also cut its stock, about $10.9 million worth. These bearish behaviors are intriguing to say the least, as total hedge fund interest fell by 8 funds by the end of the second quarter.

Let’s now take a look at hedge fund activity in other stocks – not necessarily in the same industry as ResMed Inc. (NYSE:RMD) but similarly valued. These stocks are Plains All American Pipeline, L.P. (NYSE:PAA), ArcelorMittal (NYSE:MT), CBRE Group, Inc. (NYSE:CBRE), and Lyft, Inc. (NASDAQ:LYFT). This group of stocks’ market values are closest to RMD’s market value.

As you can see these stocks had an average of 22 hedge funds with bullish positions and the average amount invested in these stocks was $852 million. That figure was $103 million in RMD’s case. Lyft, Inc. (NASDAQ:LYFT) is the most popular stock in this table. On the other hand Plains All American Pipeline, L.P. (NYSE:PAA) is the least popular one with only 11 bullish hedge fund positions. Compared to these stocks ResMed Inc. (NYSE:RMD) is even less popular than PAA. Hedge funds clearly dropped the ball on RMD as the stock delivered strong returns, though hedge funds’ consensus picks still generated respectable returns. Our calculations showed that top 20 most popular stocks among hedge funds returned 24.4% in 2019 through September 30th and outperformed the S&P 500 ETF (SPY) by 4 percentage points. A small number of hedge funds were also right about betting on RMD as the stock returned 11% during the third quarter and outperformed the market by an even larger margin.