We are still in an overall bull market and many stocks that smart money investors were piling into surged through October 17th. Among them, Facebook and Microsoft ranked among the top 3 picks and these stocks gained 45% and 39% respectively. Hedge funds’ top 3 stock picks returned 34.4% this year and beat the S&P 500 ETFs by 13 percentage points. Investing in index funds guarantees you average returns, not superior returns. We are looking to generate superior returns for our readers. That’s why we believe it isn’t a waste of time to check out hedge fund sentiment before you invest in a stock like Resideo Technologies, Inc. (NYSE:REZI).

Is Resideo Technologies, Inc. (NYSE:REZI) a cheap investment today? Investors who are in the know are in a bearish mood. The number of bullish hedge fund bets fell by 3 in recent months. Our calculations also showed that REZI isn’t among the 30 most popular stocks among hedge funds (view video below).

At the moment there are dozens of metrics investors put to use to evaluate stocks. Two of the most under-the-radar metrics are hedge fund and insider trading sentiment. We have shown that, historically, those who follow the best picks of the top fund managers can outclass the broader indices by a healthy margin (see the details here).

What does smart money think about Resideo Technologies, Inc. (NYSE:REZI)?

At the end of the second quarter, a total of 29 of the hedge funds tracked by Insider Monkey were long this stock, a change of -9% from the first quarter of 2019. By comparison, 0 hedge funds held shares or bullish call options in REZI a year ago. With the smart money’s positions undergoing their usual ebb and flow, there exists an “upper tier” of key hedge fund managers who were increasing their holdings substantially (or already accumulated large positions). 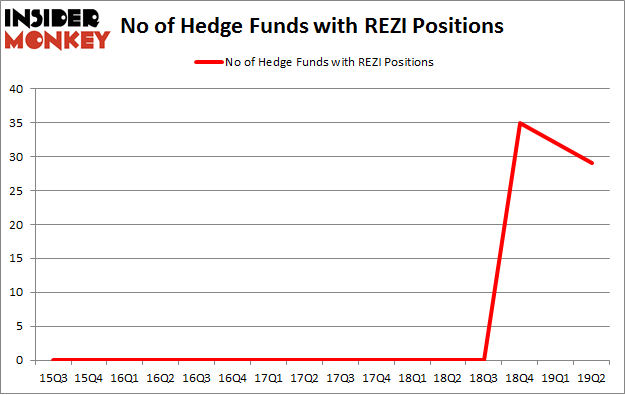 According to Insider Monkey’s hedge fund database, Praesidium Investment Management Company, managed by Kevin Oram and Peter Uddo, holds the most valuable position in Resideo Technologies, Inc. (NYSE:REZI). Praesidium Investment Management Company has a $101 million position in the stock, comprising 6.3% of its 13F portfolio. The second most bullish fund manager is Freshford Capital Management, managed by Michael Doheny, which holds a $72.3 million position; the fund has 12.2% of its 13F portfolio invested in the stock. Remaining hedge funds and institutional investors that are bullish consist of Clint Carlson’s Carlson Capital, Joshua Friedman and Mitchell Julis’s Canyon Capital Advisors and Isaac Corre’s Governors Lane.

Seeing as Resideo Technologies, Inc. (NYSE:REZI) has experienced falling interest from the aggregate hedge fund industry, logic holds that there were a few money managers who sold off their entire stakes by the end of the second quarter. At the top of the heap, Dmitry Balyasny’s Balyasny Asset Management dropped the largest investment of the “upper crust” of funds followed by Insider Monkey, worth about $13 million in stock. Sander Gerber’s fund, Hudson Bay Capital Management, also dropped its stock, about $3.1 million worth. These moves are intriguing to say the least, as aggregate hedge fund interest was cut by 3 funds by the end of the second quarter.

As you can see these stocks had an average of 24.25 hedge funds with bullish positions and the average amount invested in these stocks was $433 million. That figure was $433 million in REZI’s case. International Game Technology PLC (NYSE:IGT) is the most popular stock in this table. On the other hand El Paso Electric Company (NYSE:EE) is the least popular one with only 16 bullish hedge fund positions. Resideo Technologies, Inc. (NYSE:REZI) is not the most popular stock in this group but hedge fund interest is still above average. This is a slightly positive signal but we’d rather spend our time researching stocks that hedge funds are piling on. Our calculations showed that top 20 most popular stocks among hedge funds returned 24.4% in 2019 through September 30th and outperformed the S&P 500 ETF (SPY) by 4 percentage points. Unfortunately REZI wasn’t nearly as popular as these 20 stocks and hedge funds that were betting on REZI were disappointed as the stock returned -34.5% during the third quarter and underperformed the market. If you are interested in investing in large cap stocks with huge upside potential, you should check out the top 20 most popular stocks among hedge funds as many of these stocks already outperformed the market so far this year.