Is Republic Services, Inc. (RSG) A Good Stock To Buy?

Republic Services, Inc. (NYSE:RSG) has experienced a decrease in support from the world’s most elite money managers in recent months. RSG was in 24 hedge funds’ portfolios at the end of June. There were 30 hedge funds in our database with RSG holdings at the end of the previous quarter. Our calculations also showed that RSG isn’t among the 30 most popular stocks among hedge funds.

In today’s marketplace there are a multitude of indicators market participants use to appraise their holdings. Two of the less utilized indicators are hedge fund and insider trading sentiment. Our researchers have shown that, historically, those who follow the best picks of the best fund managers can trounce their index-focused peers by a healthy margin (see the details here). 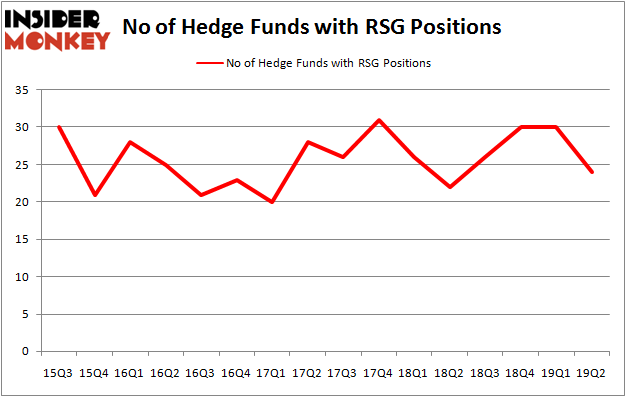 Unlike some fund managers who are betting on Dow reaching 40000 in a year, our long-short investment strategy doesn’t rely on bull markets to deliver double digit returns. We only rely on hedge fund buy/sell signals. Let’s analyze the new hedge fund action regarding Republic Services, Inc. (NYSE:RSG).

How have hedgies been trading Republic Services, Inc. (NYSE:RSG)?

More specifically, AQR Capital Management was the largest shareholder of Republic Services, Inc. (NYSE:RSG), with a stake worth $170.1 million reported as of the end of March. Trailing AQR Capital Management was GAMCO Investors, which amassed a stake valued at $141.4 million. Chilton Investment Company, Two Sigma Advisors, and GLG Partners were also very fond of the stock, giving the stock large weights in their portfolios.

Due to the fact that Republic Services, Inc. (NYSE:RSG) has witnessed bearish sentiment from hedge fund managers, it’s safe to say that there were a few funds that slashed their entire stakes in the second quarter. Intriguingly, Renaissance Technologies dumped the largest investment of all the hedgies watched by Insider Monkey, comprising about $3.3 million in stock, and Matthew Tewksbury’s Stevens Capital Management was right behind this move, as the fund dropped about $3.2 million worth. These bearish behaviors are important to note, as aggregate hedge fund interest was cut by 6 funds in the second quarter.

As you can see these stocks had an average of 41.75 hedge funds with bullish positions and the average amount invested in these stocks was $2477 million. That figure was $635 million in RSG’s case. NXP Semiconductors NV (NASDAQ:NXPI) is the most popular stock in this table. On the other hand PPG Industries, Inc. (NYSE:PPG) is the least popular one with only 27 bullish hedge fund positions. Compared to these stocks Republic Services, Inc. (NYSE:RSG) is even less popular than PPG. Hedge funds dodged a bullet by taking a bearish stance towards RSG. Our calculations showed that the top 20 most popular hedge fund stocks returned 24.4% in 2019 through September 30th and outperformed the S&P 500 ETF (SPY) by 4 percentage points. Unfortunately RSG wasn’t nearly as popular as these 20 stocks (hedge fund sentiment was very bearish); RSG investors were disappointed as the stock returned 0.4% during the third quarter and underperformed the market. If you are interested in investing in large cap stocks with huge upside potential, you should check out the top 20 most popular stocks among hedge funds as many of these stocks already outperformed the market so far in 2019.