Is Renasant Corporation (RNST) A Good Stock To Buy?

How do we determine whether Renasant Corporation (NASDAQ:RNST) makes for a good investment at the moment? We analyze the sentiment of a select group of the very best investors in the world, who spend immense amounts of time and resources studying companies. They may not always be right (no one is), but data shows that their consensus long positions have historically outperformed the market when we adjust for known risk factors.

Is Renasant Corporation (NASDAQ:RNST) a cheap investment today? The smart money is becoming less hopeful. The number of bullish hedge fund positions retreated by 4 in recent months. Our calculations also showed that RNST isn’t among the 30 most popular stocks among hedge funds.

At the moment there are tons of indicators stock traders use to assess publicly traded companies. Some of the best indicators are hedge fund and insider trading signals. We have shown that, historically, those who follow the best picks of the top money managers can trounce their index-focused peers by a solid margin (see the details here).

What does the smart money think about Renasant Corporation (NASDAQ:RNST)? 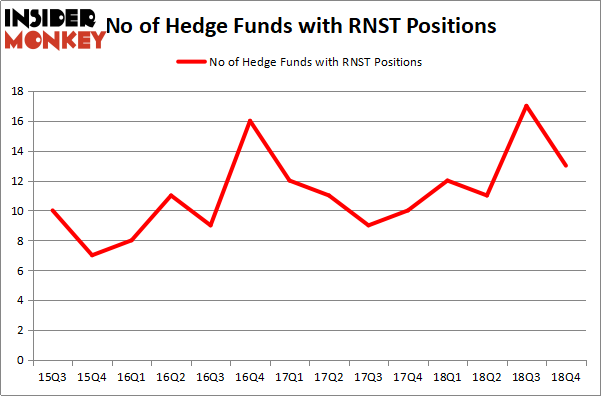 The largest stake in Renasant Corporation (NASDAQ:RNST) was held by Renaissance Technologies, which reported holding $17.3 million worth of stock at the end of December. It was followed by Royce & Associates with a $4.3 million position. Other investors bullish on the company included AlphaOne Capital Partners, Algert Coldiron Investors, and Citadel Investment Group.

Because Renasant Corporation (NASDAQ:RNST) has experienced falling interest from the aggregate hedge fund industry, it’s safe to say that there was a specific group of hedgies that decided to sell off their entire stakes in the third quarter. Intriguingly, Peter Rathjens, Bruce Clarke and John Campbell’s Arrowstreet Capital sold off the biggest stake of the 700 funds tracked by Insider Monkey, comprising an estimated $3.1 million in stock, and Noam Gottesman’s GLG Partners was right behind this move, as the fund dumped about $2.1 million worth. These moves are interesting, as aggregate hedge fund interest fell by 4 funds in the third quarter.

As you can see these stocks had an average of 13.75 hedge funds with bullish positions and the average amount invested in these stocks was $172 million. That figure was $34 million in RNST’s case. Pacira Pharmaceuticals Inc (NASDAQ:PCRX) is the most popular stock in this table. On the other hand Columbia Financial, Inc. (NASDAQ:CLBK) is the least popular one with only 6 bullish hedge fund positions. Renasant Corporation (NASDAQ:RNST) is not the least popular stock in this group but hedge fund interest is still below average. This is a slightly negative signal and we’d rather spend our time researching stocks that hedge funds are piling on. Our calculations showed that top 15 most popular stocks) among hedge funds returned 24.2% through April 22nd and outperformed the S&P 500 ETF (SPY) by more than 7 percentage points. Unfortunately RNST wasn’t nearly as popular as these 15 stock (hedge fund sentiment was quite bearish); RNST investors were disappointed as the stock returned 12.5% and underperformed the market. If you are interested in investing in large cap stocks with huge upside potential, you should check out the top 15 most popular stocks) among hedge funds as 13 of these stocks already outperformed the market this year.