Is Regenxbio Inc (RGNX) A Good Stock To Buy?

Hedge Funds and other institutional investors have just completed filing their 13Fs with the Securities and Exchange Commission, revealing their equity portfolios as of the end of September. At Insider Monkey, we follow over 700 of the best-performing investors and by analyzing their 13F filings, we can determine the stocks that they are collectively bullish on. One of their picks is Regenxbio Inc (NASDAQ:RGNX), so let’s take a closer look at the sentiment that surrounds it in the current quarter.

Regenxbio Inc (NASDAQ:RGNX) investors should pay attention to an increase in enthusiasm from smart money lately. RGNX was in 24 hedge funds’ portfolios at the end of September. There were 21 hedge funds in our database with RGNX holdings at the end of the previous quarter. Our calculations also showed that RGNX isn’t among the 30 most popular stocks among hedge funds.

In today’s marketplace there are a multitude of signals investors use to grade publicly traded companies. Some of the most useful signals are hedge fund and insider trading signals. Our researchers have shown that, historically, those who follow the top picks of the elite investment managers can beat their index-focused peers by a healthy amount (see the details here).

What have hedge funds been doing with Regenxbio Inc (NASDAQ:RGNX)?

At the end of the third quarter, a total of 24 of the hedge funds tracked by Insider Monkey were bullish on this stock, a change of 14% from the second quarter of 2018. By comparison, 20 hedge funds held shares or bullish call options in RGNX heading into this year. So, let’s check out which hedge funds were among the top holders of the stock and which hedge funds were making big moves. 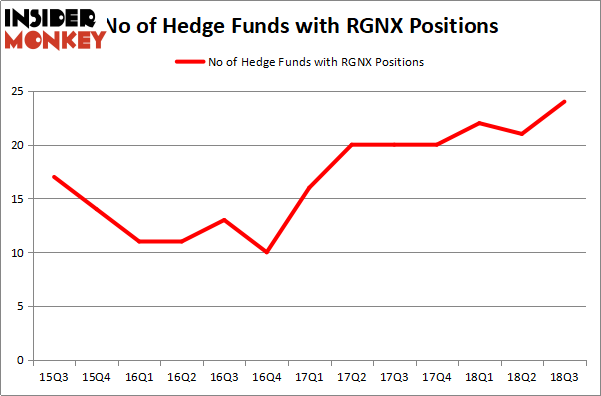 More specifically, Redmile Group was the largest shareholder of Regenxbio Inc (NASDAQ:RGNX), with a stake worth $125 million reported as of the end of September. Trailing Redmile Group was Water Street Capital, which amassed a stake valued at $72.1 million. Citadel Investment Group, Perceptive Advisors, and Marshall Wace LLP were also very fond of the stock, giving the stock large weights in their portfolios.

Consequently, some big names were leading the bulls’ herd. Renaissance Technologies, managed by Jim Simons, assembled the most outsized position in Regenxbio Inc (NASDAQ:RGNX). Renaissance Technologies had $21.6 million invested in the company at the end of the quarter. David Costen Haley’s HBK Investments also initiated a $1.6 million position during the quarter. The other funds with new positions in the stock are Peter Rathjens, Bruce Clarke and John Campbell’s Arrowstreet Capital, Jerome Pfund and Michael Sjostrom’s Sectoral Asset Management, and Benjamin A. Smith’s Laurion Capital Management.

As you can see these stocks had an average of 19 hedge funds with bullish positions and the average amount invested in these stocks was $245 million. That figure was $418 million in RGNX’s case. Avaya Holdings Corp. (NYSE:AVYA) is the most popular stock in this table. On the other hand DiamondRock Hospitality Company (NYSE:DRH) is the least popular one with only 9 bullish hedge fund positions. Regenxbio Inc (NASDAQ:RGNX) is not the most popular stock in this group but hedge fund interest is still above average. This is a slightly positive signal but we’d rather spend our time researching stocks that hedge funds are piling on. In this regard AVYA might be a better candidate to consider a long position.