Is Regal Beloit Corporation (RBC) A Good Stock To Buy?

Like everyone else, elite investors make mistakes. Some of their top consensus picks, such as Amazon, Facebook and Alibaba, have not done well in Q4 due to various reasons. Nevertheless, the data show elite investors’ consensus picks have done well on average over the long-term. The top 15 S&P 500 stocks among hedge funds at the end of September 2018 returned an average of 1% through March 15th whereas the S&P 500 Index ETF lost 2.2% during the same period. Because their consensus picks have done well, we pay attention to what elite funds think before doing extensive research on a stock. In this article, we take a closer look at Regal Beloit Corporation (NYSE:RBC) from the perspective of those elite funds.

Regal Beloit Corporation (NYSE:RBC) shares haven’t seen a lot of action during the third quarter. Overall, hedge fund sentiment was unchanged. The stock was in 17 hedge funds’ portfolios at the end of December. At the end of this article we will also compare RBC to other stocks including Companhia Siderurgica Nacional (NYSE:SID), Emergent Biosolutions Inc (NYSE:EBS), and Semtech Corporation (NASDAQ:SMTC) to get a better sense of its popularity.

What does the smart money think about Regal Beloit Corporation (NYSE:RBC)?

At Q4’s end, a total of 17 of the hedge funds tracked by Insider Monkey were long this stock, a change of 0% from the previous quarter. The graph below displays the number of hedge funds with bullish position in RBC over the last 14 quarters. With the smart money’s sentiment swirling, there exists an “upper tier” of notable hedge fund managers who were boosting their holdings significantly (or already accumulated large positions). 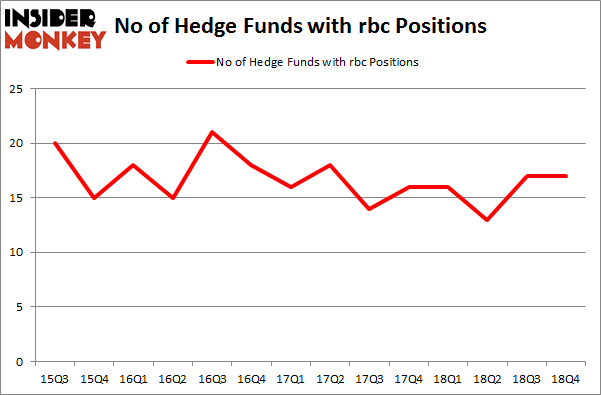 Judging by the fact that Regal Beloit Corporation (NYSE:RBC) has witnessed declining sentiment from the aggregate hedge fund industry, it’s easy to see that there exists a select few money managers that decided to sell off their positions entirely by the end of the third quarter. It’s worth mentioning that Steve Cohen’s Point72 Asset Management dropped the biggest position of the 700 funds tracked by Insider Monkey, comprising an estimated $13.2 million in stock, and Israel Englander’s Millennium Management was right behind this move, as the fund dropped about $2.4 million worth. These transactions are important to note, as total hedge fund interest stayed the same (this is a bearish signal in our experience).

As you can see these stocks had an average of 17.25 hedge funds with bullish positions and the average amount invested in these stocks was $271 million. That figure was $86 million in RBC’s case. Trinity Industries, Inc. (NYSE:TRN) is the most popular stock in this table. On the other hand Companhia Siderurgica Nacional (NYSE:SID) is the least popular one with only 7 bullish hedge fund positions. Regal Beloit Corporation (NYSE:RBC) is not the least popular stock in this group but hedge fund interest is still below average. Our calculations showed that top 15 most popular stocks) among hedge funds returned 24.2% through April 22nd and outperformed the S&P 500 ETF (SPY) by more than 7 percentage points. A small number of hedge funds were also right about betting on RBC, though not to the same extent, as the stock returned 20.9% and outperformed the market as well.