Is Realty Income Corporation (NYSE:O) A Good Stock To Buy?

It seems that the masses and most of the financial media hate hedge funds and what they do, but why is this hatred of hedge funds so prominent? At the end of the day, these asset management firms do not gamble the hard-earned money of the people who are on the edge of poverty. Truth be told, most hedge fund managers and other smaller players within this industry are very smart and skilled investors. Of course, they may also make wrong bets in some instances, but no one knows what the future holds and how market participants will react to the bountiful news that floods in each day. The Standard and Poor’s 500 Index returned approximately 13.1% in the first 2.5 months of this year (including dividend payments). Conversely, hedge funds’ top 15 large-cap stock picks generated a return of 19.7% during the same 2.5-month period, with 93% of these stock picks outperforming the broader market benchmark. Coincidence? It might happen to be so, but it is unlikely. Our research covering the last 18 years indicates that hedge funds’ stock picks generate superior risk-adjusted returns. That’s why we believe it isn’t a waste of time to check out hedge fund sentiment before you invest in a stock like Realty Income Corporation (NYSE:O).

Realty Income Corporation (NYSE:O) has experienced an increase in activity from the world’s largest hedge funds lately. Our calculations also showed that O isn’t among the 30 most popular stocks among hedge funds.

In the 21st century investor’s toolkit there are a multitude of gauges shareholders can use to assess their stock investments. A couple of the most innovative gauges are hedge fund and insider trading interest. We have shown that, historically, those who follow the best picks of the top money managers can trounce their index-focused peers by a significant margin (see the details here).

What have hedge funds been doing with Realty Income Corporation (NYSE:O)? 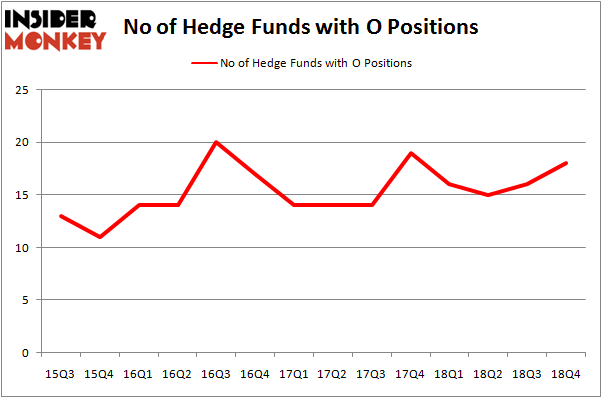 More specifically, Zimmer Partners was the largest shareholder of Realty Income Corporation (NYSE:O), with a stake worth $198.3 million reported as of the end of September. Trailing Zimmer Partners was Renaissance Technologies, which amassed a stake valued at $23.6 million. Adage Capital Management, Citadel Investment Group, and AQR Capital Management were also very fond of the stock, giving the stock large weights in their portfolios.

With a general bullishness amongst the heavyweights, some big names were leading the bulls’ herd. Sanoor Capital, managed by Jasjit Rekhi, established the most valuable position in Realty Income Corporation (NYSE:O). Sanoor Capital had $6.3 million invested in the company at the end of the quarter. Jeffrey Talpins’s Element Capital Management also initiated a $5.1 million position during the quarter. The other funds with new positions in the stock are Ben Levine, Andrew Manuel and Stefan Renold’s LMR Partners, David Harding’s Winton Capital Management, and Claes Fornell’s CSat Investment Advisory.

As you can see these stocks had an average of 25.25 hedge funds with bullish positions and the average amount invested in these stocks was $654 million. That figure was $306 million in O’s case. Northern Trust Corporation (NASDAQ:NTRS) is the most popular stock in this table. On the other hand Sasol Limited (NYSE:SSL) is the least popular one with only 7 bullish hedge fund positions. Realty Income Corporation (NYSE:O) is not the least popular stock in this group but hedge fund interest is still below average. This is a slightly negative signal and we’d rather spend our time researching stocks that hedge funds are piling on. As we mentioned above our calculations showed that top 15 most popular stocks among hedge funds returned 19.7% through March 15th and outperformed the S&P 500 ETF (SPY) by 6.6 percentage points. Hedge funds were also right about betting on O, though not to the same extent, as the stock returned 13.7% and outperformed the market as well.