For its first quarter, Quiksilver, Inc. (NYSE:ZQK) posted a net loss of $31.1 million, or $0.19 per share, down from a loss of $0.14 per share, or $22.6 million, it posted a year earlier. Excluding restructuring charges and impairments, Quiksilver’s earnings came in at $0.16 per share. Analysts polled by FactSet expected a loss of $0.07 per share, on an adjusted basis.

Over the past four decades, Quiksilver, Inc. (NYSE:ZQK) has been an inspirational rags-to-riches story that has been well documented by the media. 38 years ago, former CEO Bob McKnight founded the company with surfers Peter Townend and Jeff Hakman. Together, the trio established Quiksilver in a Newport Beach garage.

McKnight started by selling surfing shorts to shops from the trunk of his car – and eventually went on to become CEO of a multinational company that generates approximately $2 billion in annual sales.

However, the recession of 2007-2009 dealt the company a critical blow, from which it has yet to fully recover. In addition, its ill-timed acquisition of ski wear company Rossignol for $560.8 million in 2005 sent its debt skyrocketing over $1 billion. The acquisition never paid off, and Quiksilver sold the brand for a humbling $147 million to Chartreuse & Mont Blanc in 2008. McKnight calls the ordeal “one of the most financially and emotionally painful chapters in Quiksilver’s history.”

McKnight stepped down last year, handing over the reins of the company to former The Walt Disney Company (NYSE:DIS) and NIKE, Inc. (NYSE:NKE) executive Andy Mooney. Mooney has been in charge of the company since Jan. 11.

Roxy is Quiksilver’s female surf gear brand, which also reported a 7% decline to $115 million. Roxy was established in 1991, and originally targeted 14 to 17 year old females. Its product line has since been expanded to also include young women in their early to mid-20s.

Quiksilver recently discontinued its Quiksilver Women’s and Girls’ lines, which have been increasingly overshadowed by its Roxy label. Quiksilver Women was launched in 2008, with the intent to focus on the 18 to 24 year-old female demographic. It was later expanded to include Quiksilver Girls, but the rising popularity of Roxy gradually overlapped both lines.

The company’s skate footwear brand, DC Shoes, was its only source of positive growth, reporting 1% growth to $109 million. Same-store sales across all of its company-owned locations slid 1%.

Losses across the world

Over 60% of Quiksilver’s revenue is generated from international markets. It operates 829 company or licensed retail stores across 90 countries.

Quiksilver’s gross margin edged up from 50.7% to 51.0%, which the company attributes to lower sales in its wholesale and Americas segments, which generally report lower gross margins. Lower sales of lower margin products in turn boosted the average gross margin of products sold – at the cost of lower sales volume.

Quiksilver’s SG&A (sales, general & administrative) expenses decreased from $230 million to $225 million, as a result of ongoing expense reductions efforts. However, the majority of those savings were offset by a $4 million increase in e-commerce expenses used to expand and maintain its online business.

In this chart, we can see several problems with Quiksilver’s financials. 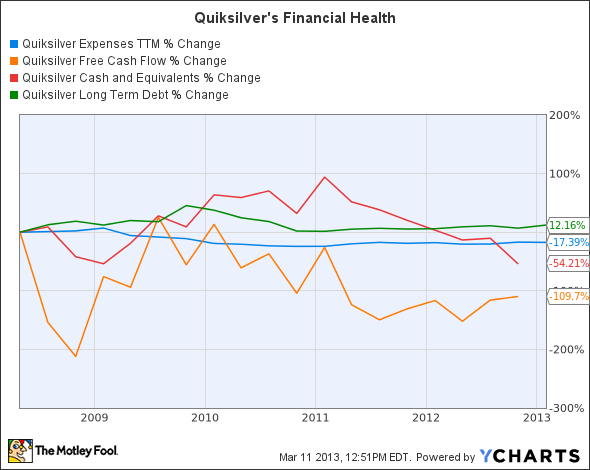