The latest 13F reporting period has come and gone, and Insider Monkey is again at the forefront when it comes to making use of this gold mine of data. We have processed the filings of the more than 700 world-class investment firms that we track and now have access to the collective wisdom contained in these filings, which are based on their June 28 holdings, data that is available nowhere else. Should you consider Progress Software Corporation (NASDAQ:PRGS) for your portfolio? We’ll look to this invaluable collective wisdom for the answer.

Progress Software Corporation (NASDAQ:PRGS) shares haven’t seen a lot of action during the second quarter. Overall, hedge fund sentiment was unchanged. The stock was in 24 hedge funds’ portfolios at the end of June. At the end of this article we will also compare PRGS to other stocks including Tower Semiconductor Ltd. (NASDAQ:TSEM), Goosehead Insurance, Inc. (NASDAQ:GSHD), and Portola Pharmaceuticals Inc (NASDAQ:PTLA) to get a better sense of its popularity.

If you’d ask most shareholders, hedge funds are perceived as worthless, old investment vehicles of years past. While there are more than 8000 funds trading today, Our researchers hone in on the elite of this club, around 750 funds. It is estimated that this group of investors direct the majority of the hedge fund industry’s total asset base, and by keeping an eye on their matchless stock picks, Insider Monkey has unsheathed numerous investment strategies that have historically beaten the S&P 500 index. Insider Monkey’s flagship hedge fund strategy outperformed the S&P 500 index by around 5 percentage points annually since its inception in May 2014. We were able to generate large returns even by identifying short candidates. Our portfolio of short stocks lost 25.7% since February 2017 (through September 30th) even though the market was up more than 33% during the same period. We just shared a list of 10 short targets in our latest quarterly update . 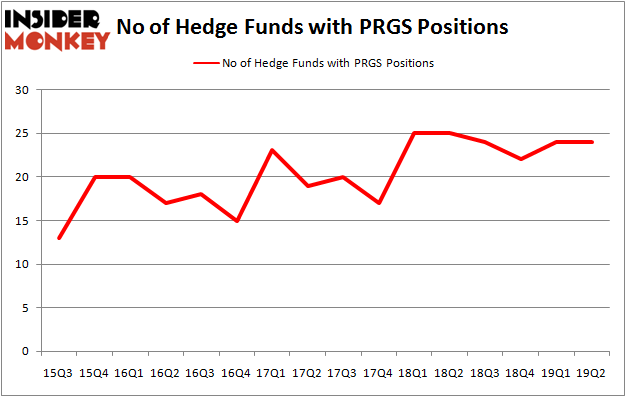 The largest stake in Progress Software Corporation (NASDAQ:PRGS) was held by GLG Partners, which reported holding $73.4 million worth of stock at the end of March. It was followed by Renaissance Technologies with a $59.3 million position. Other investors bullish on the company included Fisher Asset Management, D E Shaw, and Arrowstreet Capital.

Since Progress Software Corporation (NASDAQ:PRGS) has witnessed falling interest from the entirety of the hedge funds we track, logic holds that there exists a select few money managers who sold off their full holdings heading into Q3. It’s worth mentioning that Benjamin A. Smith’s Laurion Capital Management dropped the largest position of the 750 funds monitored by Insider Monkey, totaling close to $1.5 million in stock, and Andrew Feldstein and Stephen Siderow’s Blue Mountain Capital was right behind this move, as the fund cut about $0.8 million worth. These bearish behaviors are intriguing to say the least, as aggregate hedge fund interest stayed the same (this is a bearish signal in our experience).

As you can see these stocks had an average of 13 hedge funds with bullish positions and the average amount invested in these stocks was $159 million. That figure was $268 million in PRGS’s case. Portola Pharmaceuticals Inc (NASDAQ:PTLA) is the most popular stock in this table. On the other hand Goosehead Insurance, Inc. (NASDAQ:GSHD) is the least popular one with only 7 bullish hedge fund positions. Compared to these stocks Progress Software Corporation (NASDAQ:PRGS) is more popular among hedge funds. Our calculations showed that top 20 most popular stocks among hedge funds returned 24.4% in 2019 through September 30th and outperformed the S&P 500 ETF (SPY) by 4 percentage points. Unfortunately PRGS wasn’t nearly as popular as these 20 stocks and hedge funds that were betting on PRGS were disappointed as the stock returned -12.4% during the third quarter and underperformed the market. If you are interested in investing in large cap stocks with huge upside potential, you should check out the top 20 most popular stocks among hedge funds as many of these stocks already outperformed the market in Q3.