Is Principia Biopharma Inc. (PRNB) A Good Stock To Buy?

The Insider Monkey team has completed processing the quarterly 13F filings for the June quarter submitted by the hedge funds and other money managers included in our extensive database. Most hedge fund investors experienced strong gains on the back of a strong market performance, which certainly propelled them to adjust their equity holdings so as to maintain the desired risk profile. As a result, the relevancy of these public filings and their content is indisputable, as they may reveal numerous high-potential stocks. The following article will discuss the smart money sentiment towards Principia Biopharma Inc. (NASDAQ:PRNB).

Is Principia Biopharma Inc. (NASDAQ:PRNB) a splendid stock to buy now? Hedge funds are getting more bullish. The number of bullish hedge fund bets moved up by 1 lately. Our calculations also showed that PRNB isn’t among the 30 most popular stocks among hedge funds (see the video below). 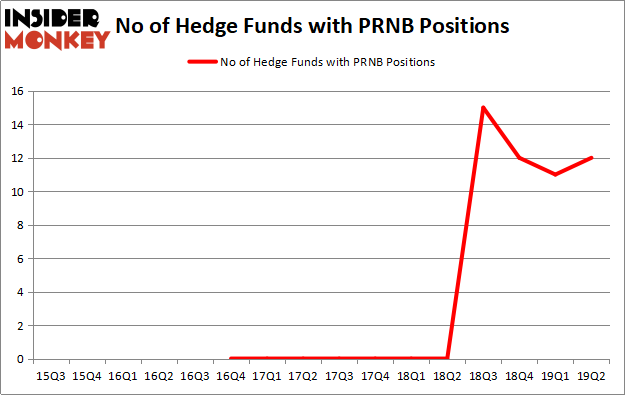 The largest stake in Principia Biopharma Inc. (NASDAQ:PRNB) was held by Baker Bros. Advisors, which reported holding $59.3 million worth of stock at the end of March. It was followed by OrbiMed Advisors with a $53.3 million position. Other investors bullish on the company included Cormorant Asset Management, Partner Fund Management, and Adage Capital Management.

Consequently, specific money managers were breaking ground themselves. Partner Fund Management, managed by Christopher James, created the most outsized position in Principia Biopharma Inc. (NASDAQ:PRNB). Partner Fund Management had $19.7 million invested in the company at the end of the quarter. Jeremy Green’s Redmile Group also made a $8.1 million investment in the stock during the quarter. The other funds with brand new PRNB positions are Steve Cohen’s Point72 Asset Management and Renaissance Technologies.

As you can see these stocks had an average of 10.25 hedge funds with bullish positions and the average amount invested in these stocks was $111 million. That figure was $226 million in PRNB’s case. Deciphera Pharmaceuticals, Inc. (NASDAQ:DCPH) is the most popular stock in this table. On the other hand Bluegreen Vacations Corporation (NYSE:BXG) is the least popular one with only 6 bullish hedge fund positions. Principia Biopharma Inc. (NASDAQ:PRNB) is not the most popular stock in this group but hedge fund interest is still above average. This is a slightly positive signal but we’d rather spend our time researching stocks that hedge funds are piling on. Our calculations showed that top 20 most popular stocks among hedge funds returned 24.4% in 2019 through September 30th and outperformed the S&P 500 ETF (SPY) by 4 percentage points. Unfortunately PRNB wasn’t nearly as popular as these 20 stocks and hedge funds that were betting on PRNB were disappointed as the stock returned -14.9% during the third quarter and underperformed the market. If you are interested in investing in large cap stocks with huge upside potential, you should check out the top 20 most popular stocks among hedge funds as many of these stocks already outperformed the market so far this year.