Is Premier Inc (PINC) Going To Burn These Hedge Funds?

The financial regulations require hedge funds and wealthy investors that crossed the $100 million equity holdings threshold to file a report that shows their positions at the end of every quarter. Even though it isn’t the intention, these filings to a certain extent level the playing field for ordinary investors. The latest round of 13F filings disclosed the funds’ positions on June 28th. We at Insider Monkey have made an extensive database of nearly 750 of those established hedge funds and famous value investors’ filings. In this article, we analyze how these elite funds and prominent investors traded Premier Inc (NASDAQ:PINC) based on those filings.

Hedge fund interest in Premier Inc (NASDAQ:PINC) shares was flat at the end of last quarter. This is usually a negative indicator. At the end of this article we will also compare PINC to other stocks including Xenia Hotels & Resorts Inc (NYSE:XHR), Seritage Growth Properties (NYSE:SRG), and H.B. Fuller Company (NYSE:FUL) to get a better sense of its popularity. Our calculations also showed that PINC isn’t among the 30 most popular stocks among hedge funds (view the video below).

At Q2’s end, a total of 16 of the hedge funds tracked by Insider Monkey were long this stock, a change of 0% from the first quarter of 2019. The graph below displays the number of hedge funds with bullish position in PINC over the last 16 quarters. With hedge funds’ positions undergoing their usual ebb and flow, there exists a few key hedge fund managers who were increasing their stakes considerably (or already accumulated large positions). 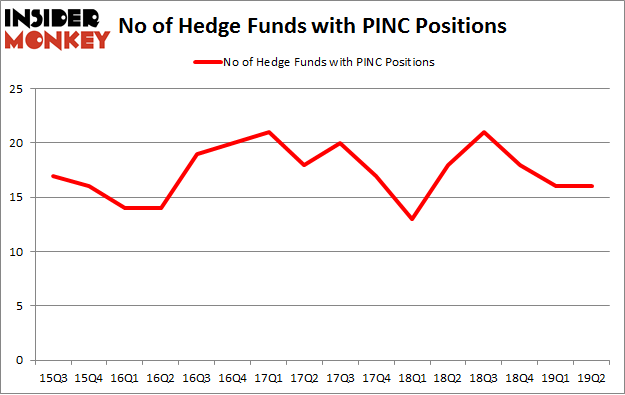 More specifically, Renaissance Technologies was the largest shareholder of Premier Inc (NASDAQ:PINC), with a stake worth $123.8 million reported as of the end of March. Trailing Renaissance Technologies was Millennium Management, which amassed a stake valued at $16.1 million. East Side Capital (RR Partners), D E Shaw, and GLG Partners were also very fond of the stock, giving the stock large weights in their portfolios.

Since Premier Inc (NASDAQ:PINC) has witnessed bearish sentiment from the smart money, logic holds that there were a few money managers that elected to cut their entire stakes heading into Q3. Interestingly, Israel Englander’s Millennium Management said goodbye to the biggest stake of the “upper crust” of funds followed by Insider Monkey, comprising about $1.7 million in call options, and Ken Griffin’s Citadel Investment Group was right behind this move, as the fund said goodbye to about $0.7 million worth. These transactions are intriguing to say the least, as total hedge fund interest stayed the same (this is a bearish signal in our experience).