Is People’s United Financial, Inc. (NASDAQ:PBCT) a good stock to buy right now? We at Insider Monkey like to examine what billionaires and hedge funds think of a company before doing days of research on it. Given their 2 and 20 payment structure, hedge funds have more resources than the average investor. The funds have access to expert networks and get tips from industry insiders. They also have numerous Ivy League graduates and MBAs. Like everyone else, hedge funds perform miserably at times, but their consensus picks have historically outperformed the market after risk adjustments.

People’s United Financial, Inc. (NASDAQ:PBCT) shareholders have witnessed an increase in support from the world’s most elite money managers in recent months. PBCT was in 20 hedge funds’ portfolios at the end of September. There were 13 hedge funds in our database with PBCT positions at the end of the previous quarter. Our calculations also showed that pbct isn’t among the 30 most popular stocks among hedge funds.

To most investors, hedge funds are seen as worthless, outdated investment vehicles of yesteryear. While there are over 8,000 funds trading at present, Our experts choose to focus on the elite of this group, about 700 funds. These hedge fund managers orchestrate the majority of the hedge fund industry’s total capital, and by paying attention to their first-class stock picks, Insider Monkey has found several investment strategies that have historically outrun Mr. Market. Insider Monkey’s flagship hedge fund strategy outrun the S&P 500 index by 6 percentage points annually since its inception in May 2014 through early November 2018. We were able to generate large returns even by identifying short candidates. Our portfolio of short stocks lost 24% since February 2017 (through December 3rd) even though the market was up nearly 23% during the same period. We just shared a list of 11 short targets in our latest quarterly update.

At the end of the third quarter, a total of 20 of the hedge funds tracked by Insider Monkey were long this stock, a change of 54% from the previous quarter. The graph below displays the number of hedge funds with bullish position in PBCT over the last 13 quarters. With hedgies’ positions undergoing their usual ebb and flow, there exists an “upper tier” of noteworthy hedge fund managers who were increasing their holdings meaningfully (or already accumulated large positions). 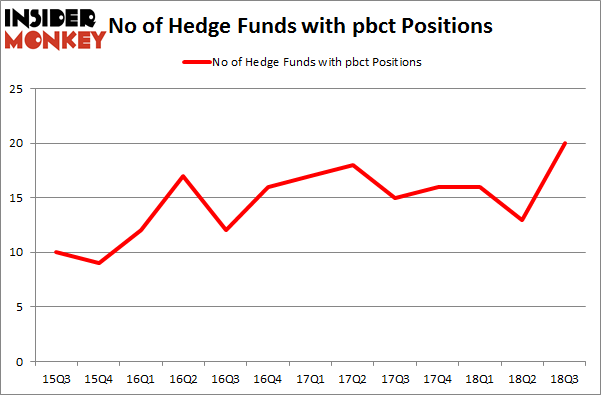 Of the funds tracked by Insider Monkey, Millennium Management, managed by Israel Englander, holds the largest position in People’s United Financial, Inc. (NASDAQ:PBCT). Millennium Management has a $28 million position in the stock, comprising less than 0.1%% of its 13F portfolio. The second largest stake is held by Two Sigma Advisors, led by John Overdeck and David Siegel, holding a $20.5 million position; the fund has 0.1% of its 13F portfolio invested in the stock. Remaining members of the smart money with similar optimism comprise Jim Simons’s Renaissance Technologies, Michael Platt and William Reeves’s BlueCrest Capital Mgmt. and Daniel Johnson’s Gillson Capital.

As you can see these stocks had an average of 21.5 hedge funds with bullish positions and the average amount invested in these stocks was $621 million. That figure was $121 million in PBCT’s case. Commscope Holding Company Inc (NASDAQ:COMM) is the most popular stock in this table. On the other hand Ternium S.A. (NYSE:TX) is the least popular one with only 14 bullish hedge fund positions. People’s United Financial, Inc. (NASDAQ:PBCT) is not the least popular stock in this group but hedge fund interest is still below average. This is a slightly negative signal and we’d rather spend our time researching stocks that hedge funds are piling on. In this regard COMM might be a better candidate to consider a long position.