Is Patterson-UTI Energy, Inc. (PTEN) A Good Stock To Buy?

It was a rough fourth quarter for many hedge funds, which were naturally unable to overcome the big dip in the broad market, as the S&P 500 fell by about 7% during October and average hedge fund losing about 3%. The Russell 2000, composed of smaller companies, performed even worse, trailing the S&P by about 4 percentage points during the first half of Q4, as investors fled less-known quantities for safe havens. This was the case with hedge funds, who we heard were pulling money from the market amid the volatility, which included money from small-cap stocks, which they invest in at a higher rate than other investors. This action contributed to the greater decline in these stocks during the tumultuous period. We will study how this market volatility affected their sentiment towards Patterson-UTI Energy, Inc. (NASDAQ:PTEN) during the quarter below.

Is Patterson-UTI Energy, Inc. (NASDAQ:PTEN) the right investment to pursue these days? Money managers are turning less bullish. The number of long hedge fund bets dropped by 7 recently. Our calculations also showed that PTEN isn’t among the 30 most popular stocks among hedge funds.

If you’d ask most investors, hedge funds are viewed as slow, old financial vehicles of years past. While there are over 8,000 funds in operation at present, Our researchers choose to focus on the bigwigs of this club, about 700 funds. Most estimates calculate that this group of people shepherd the lion’s share of the smart money’s total capital, and by monitoring their unrivaled stock picks, Insider Monkey has brought to light numerous investment strategies that have historically outperformed the S&P 500 index. Insider Monkey’s flagship hedge fund strategy outpaced the S&P 500 index by 6 percentage points a year since its inception in May 2014 through early November 2018. We were able to generate large returns even by identifying short candidates. Our portfolio of short stocks lost 24% since February 2017 (through December 3rd) even though the market was up nearly 23% during the same period. We just shared a list of 11 short targets in our latest quarterly update.

What does the smart money think about Patterson-UTI Energy, Inc. (NASDAQ:PTEN)?

Heading into the fourth quarter of 2018, a total of 31 of the hedge funds tracked by Insider Monkey were long this stock, a change of -18% from the previous quarter. By comparison, 40 hedge funds held shares or bullish call options in PTEN heading into this year. With hedgies’ capital changing hands, there exists a select group of key hedge fund managers who were boosting their stakes substantially (or already accumulated large positions). 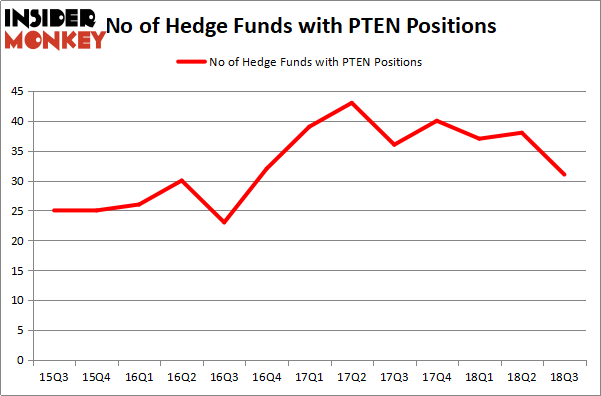 According to publicly available hedge fund and institutional investor holdings data compiled by Insider Monkey, Andreas Halvorsen’s Viking Global has the biggest position in Patterson-UTI Energy, Inc. (NASDAQ:PTEN), worth close to $78.1 million, corresponding to 0.4% of its total 13F portfolio. On Viking Global’s heels is Steve Cohen of Point72 Asset Management, with a $72.7 million position; 0.3% of its 13F portfolio is allocated to the company. Other peers that are bullish comprise Cliff Asness’s AQR Capital Management, Andrew Feldstein and Stephen Siderow’s Blue Mountain Capital and Robert Rodriguez and Steven Romick’s First Pacific Advisors LLC.

Since Patterson-UTI Energy, Inc. (NASDAQ:PTEN) has faced a decline in interest from the aggregate hedge fund industry, we can see that there lies a certain “tier” of hedgies who were dropping their full holdings by the end of the third quarter. At the top of the heap, Josh Donfeld and David Rogers’s Castle Hook Partners dumped the biggest position of the 700 funds tracked by Insider Monkey, valued at an estimated $26.9 million in stock, and Anand Parekh’s Alyeska Investment Group was right behind this move, as the fund dropped about $12 million worth. These transactions are intriguing to say the least, as total hedge fund interest dropped by 7 funds by the end of the third quarter.

As you can see these stocks had an average of 16.75 hedge funds with bullish positions and the average amount invested in these stocks was $167 million. That figure was $472 million in PTEN’s case. AutoNation, Inc. (NYSE:AN) is the most popular stock in this table. On the other hand Selective Insurance Group (NASDAQ:SIGI) is the least popular one with only 10 bullish hedge fund positions. Compared to these stocks Patterson-UTI Energy, Inc. (NASDAQ:PTEN) is more popular among hedge funds. Considering that hedge funds are fond of this stock in relation to its market cap peers, it may be a good idea to analyze it in detail and potentially include it in your portfolio.