Is Parker-Hannifin Corporation (PH) A Good Stock To Buy?

The latest 13F reporting period has come and gone, and Insider Monkey is again at the forefront when it comes to making use of this gold mine of data. Insider Monkey finished processing more than 730 13F filings submitted by hedge funds and prominent investors. These filings show these funds’ portfolio positions as of June 28th, 2019. What do these smart investors think about Parker-Hannifin Corporation (NYSE:PH)?

Parker-Hannifin Corporation (NYSE:PH) has seen a decrease in hedge fund interest of late. Our calculations also showed that PH isn’t among the 30 most popular stocks among hedge funds (see the video below).

What have hedge funds been doing with Parker-Hannifin Corporation (NYSE:PH)?

At Q2’s end, a total of 26 of the hedge funds tracked by Insider Monkey were bullish on this stock, a change of -7% from one quarter earlier. Below, you can check out the change in hedge fund sentiment towards PH over the last 16 quarters. With the smart money’s positions undergoing their usual ebb and flow, there exists a few notable hedge fund managers who were increasing their holdings substantially (or already accumulated large positions). 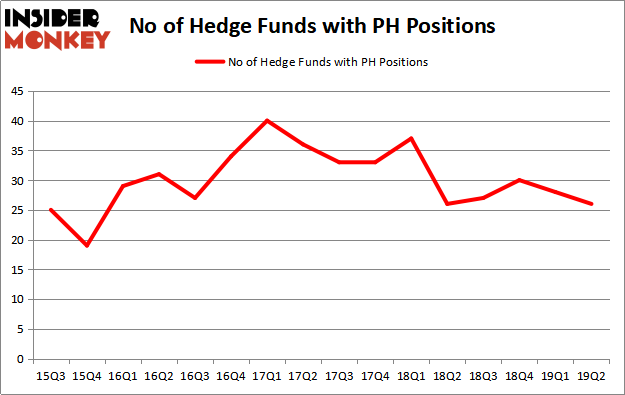 When looking at the institutional investors followed by Insider Monkey, Diamond Hill Capital, managed by Ric Dillon, holds the most valuable position in Parker-Hannifin Corporation (NYSE:PH). Diamond Hill Capital has a $266.6 million position in the stock, comprising 1.4% of its 13F portfolio. The second most bullish fund manager is Richard S. Pzena of Pzena Investment Management, with a $55.8 million position; the fund has 0.3% of its 13F portfolio invested in the stock. Some other members of the smart money that are bullish comprise Cliff Asness’s AQR Capital Management, Peter Rathjens, Bruce Clarke and John Campbell’s Arrowstreet Capital and Ken Griffin’s Citadel Investment Group.

Since Parker-Hannifin Corporation (NYSE:PH) has faced declining sentiment from hedge fund managers, it’s easy to see that there lies a certain “tier” of money managers who sold off their positions entirely by the end of the second quarter. At the top of the heap, Clint Murray’s Lodge Hill Capital dumped the largest stake of all the hedgies monitored by Insider Monkey, comprising about $15.2 million in stock, and Phill Gross and Robert Atchinson’s Adage Capital Management was right behind this move, as the fund said goodbye to about $7.4 million worth. These transactions are interesting, as aggregate hedge fund interest fell by 2 funds by the end of the second quarter.

As you can see these stocks had an average of 21.25 hedge funds with bullish positions and the average amount invested in these stocks was $269 million. That figure was $566 million in PH’s case. McCormick & Company, Incorporated (NYSE:MKC) is the most popular stock in this table. On the other hand Imperial Oil Limited (NYSEAMEX:IMO) is the least popular one with only 12 bullish hedge fund positions. Parker-Hannifin Corporation (NYSE:PH) is not the most popular stock in this group but hedge fund interest is still above average. Our calculations showed that top 20 most popular stocks among hedge funds returned 24.4% in 2019 through September 30th and outperformed the S&P 500 ETF (SPY) by 4 percentage points. Hedge funds were also right about betting on PH as the stock returned 6.8% during the third quarter and outperformed the market. Hedge funds were rewarded for their relative bullishness.