Is Park Aerospace Corp. (PKE) A Good Stock To Buy?

Park Aerospace Corp. (NYSE:PKE) was in 9 hedge funds’ portfolios at the end of June. PKE investors should pay attention to a decrease in hedge fund sentiment in recent months. There were 10 hedge funds in our database with PKE positions at the end of the previous quarter. Our calculations also showed that PKE isn’t among the 30 most popular stocks among hedge funds (see the video below).

To most market participants, hedge funds are assumed to be underperforming, outdated financial tools of the past. While there are more than 8000 funds with their doors open at present, We choose to focus on the crème de la crème of this group, about 750 funds. Most estimates calculate that this group of people handle the lion’s share of all hedge funds’ total capital, and by following their top investments, Insider Monkey has found numerous investment strategies that have historically surpassed Mr. Market. Insider Monkey’s flagship hedge fund strategy surpassed the S&P 500 index by around 5 percentage points annually since its inception in May 2014. We were able to generate large returns even by identifying short candidates. Our portfolio of short stocks lost 25.7% since February 2017 (through September 30th) even though the market was up more than 33% during the same period. We just shared a list of 10 short targets in our latest quarterly update . 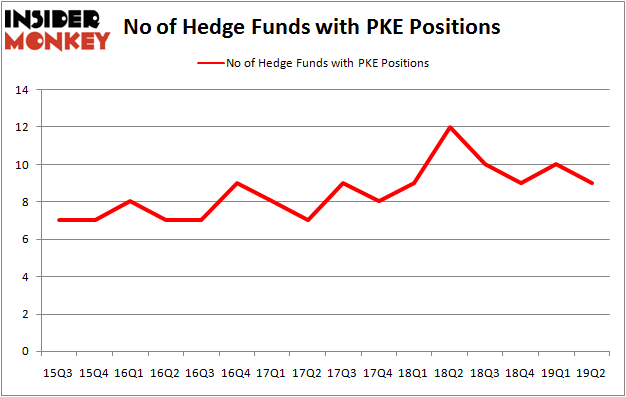 In addition to following the biggest hedge funds for investment ideas, we also share stock pitches from conferences, investor letters and other sources  like this one where the fund manager is talking about two under the radar 1000% return potential stocks: first one in internet infrastructure and the second in the heart of advertising market. We use hedge fund buy/sell signals to determine whether to conduct in-depth analysis of these stock ideas which take days. We’re going to take a look at the fresh hedge fund action regarding Park Aerospace Corp. (NYSE:PKE).

Among these funds, Raging Capital Management held the most valuable stake in Park Aerospace Corp. (NYSE:PKE), which was worth $31.3 million at the end of the second quarter. On the second spot was Renaissance Technologies which amassed $27.3 million worth of shares. Moreover, GAMCO Investors, Citadel Investment Group, and Millennium Management were also bullish on Park Aerospace Corp. (NYSE:PKE), allocating a large percentage of their portfolios to this stock.

Judging by the fact that Park Aerospace Corp. (NYSE:PKE) has witnessed a decline in interest from the entirety of the hedge funds we track, logic holds that there exists a select few hedgies that elected to cut their entire stakes heading into Q3. At the top of the heap, David Harding’s Winton Capital Management cut the biggest investment of the “upper crust” of funds monitored by Insider Monkey, comprising about $1.4 million in stock, and Gavin Saitowitz and Cisco J. del Valle’s Springbok Capital was right behind this move, as the fund dumped about $0 million worth. These moves are intriguing to say the least, as total hedge fund interest dropped by 1 funds heading into Q3.

As you can see these stocks had an average of 5.5 hedge funds with bullish positions and the average amount invested in these stocks was $25 million. That figure was $76 million in PKE’s case. Carriage Services, Inc. (NYSE:CSV) is the most popular stock in this table. On the other hand Willis Lease Finance Corporation (NASDAQ:WLFC) is the least popular one with only 3 bullish hedge fund positions. Park Aerospace Corp. (NYSE:PKE) is not the most popular stock in this group but hedge fund interest is still above average. Our calculations showed that top 20 most popular stocks among hedge funds returned 24.4% in 2019 through September 30th and outperformed the S&P 500 ETF (SPY) by 4 percentage points. Hedge funds were also right about betting on PKE as the stock returned 6.4% during the third quarter and outperformed the market. Hedge funds were rewarded for their relative bullishness.