Is Pampa Energia S.A. (PAM) A Good Stock To Buy?

Pampa Energia S.A. (NYSE:PAM) shares haven’t seen a lot of action during the third quarter. Overall, hedge fund sentiment was unchanged. The stock was in 15 hedge funds’ portfolios at the end of the fourth quarter of 2018. The level and the change in hedge fund popularity aren’t the only variables you need to analyze to decipher hedge funds’ perspectives. A stock may witness a boost in popularity but it may still be less popular than similarly priced stocks. That’s why at the end of this article we will examine companies such as Range Resources Corp. (NYSE:RRC), Premier Inc (NASDAQ:PINC), and South Jersey Industries Inc (NYSE:SJI) to gather more data points. 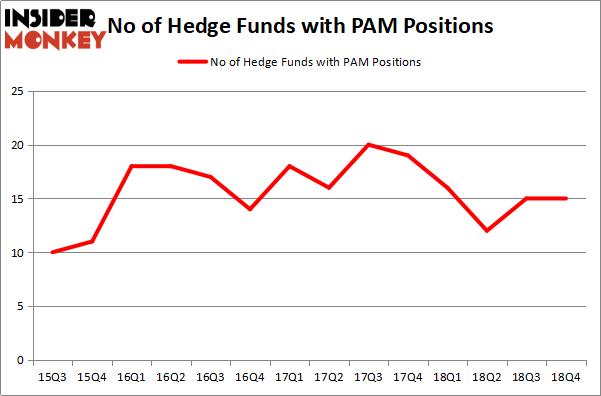 The largest stake in Pampa Energia S.A. (NYSE:PAM) was held by Point State Capital, which reported holding $160.7 million worth of stock at the end of December. It was followed by OZ Management with a $60.5 million position. Other investors bullish on the company included Serengeti Asset Management, Oaktree Capital Management, and Columbus Hill Capital Management.

Seeing as Pampa Energia S.A. (NYSE:PAM) has witnessed a decline in interest from hedge fund managers, logic holds that there lies a certain “tier” of hedgies that slashed their full holdings heading into Q3. At the top of the heap, Steve Cohen’s Point72 Asset Management dropped the largest position of the 700 funds monitored by Insider Monkey, comprising about $8.6 million in stock. Hugh Sloane’s fund, Sloane Robinson Investment Management, also said goodbye to its stock, about $6.8 million worth. These transactions are interesting, as aggregate hedge fund interest stayed the same (this is a bearish signal in our experience).

As you can see these stocks had an average of 18.75 hedge funds with bullish positions and the average amount invested in these stocks was $280 million. That figure was $295 million in PAM’s case. Range Resources Corp. (NYSE:RRC) is the most popular stock in this table. On the other hand South Jersey Industries Inc (NYSE:SJI) is the least popular one with only 12 bullish hedge fund positions. Pampa Energia S.A. (NYSE:PAM) is not the least popular stock in this group but hedge fund interest is still below average. This is a slightly negative signal and we’d rather spend our time researching stocks that hedge funds are piling on. Our calculations showed that top 15 most popular stocks) among hedge funds returned 24.2% through April 22nd and outperformed the S&P 500 ETF (SPY) by more than 7 percentage points. Unfortunately PAM wasn’t nearly as popular as these 15 stock (hedge fund sentiment was quite bearish); PAM investors were disappointed as the stock returned -26% and underperformed the market. If you are interested in investing in large cap stocks with huge upside potential, you should check out the top 15 most popular stocks) among hedge funds as 13 of these stocks already outperformed the market this year.