Is Pacific Premier Bancorp, Inc. (NASDAQ:PPBI) a good stock to buy right now? We at Insider Monkey like to examine what billionaires and hedge funds think of a company before spending days of research on it. Given their 2 and 20 payment structure, hedge funds have more incentives and resources than the average investor. The funds have access to expert networks and get tips from industry insiders. They also employ numerous Ivy League graduates and MBAs. Like everyone else, hedge funds perform miserably at times, but their consensus picks have historically outperformed the market after risk adjustments.

Pacific Premier Bancorp, Inc. (NASDAQ:PPBI) shares haven’t seen a lot of action during the third quarter. Overall, hedge fund sentiment was unchanged. The stock was in 8 hedge funds’ portfolios at the end of September. At the end of this article we will also compare PPBI to other stocks including Terex Corporation (NYSE:TEX), OSI Systems, Inc. (NASDAQ:OSIS), and Knowles Corp (NYSE:KN) to get a better sense of its popularity.

In the eyes of most stock holders, hedge funds are viewed as unimportant, old financial tools of yesteryear. While there are greater than 8000 funds with their doors open at the moment, Our experts choose to focus on the bigwigs of this club, about 750 funds. These money managers administer bulk of the hedge fund industry’s total capital, and by paying attention to their first-class equity investments, Insider Monkey has determined various investment strategies that have historically outstripped Mr. Market. Insider Monkey’s flagship short hedge fund strategy surpassed the S&P 500 short ETFs by around 20 percentage points per annum since its inception in May 2014. Our portfolio of short stocks lost 27.8% since February 2017 (through November 21st) even though the market was up more than 39% during the same period. We just shared a list of 7 short targets in our latest quarterly update .

We leave no stone unturned when looking for the next great investment idea. For example Europe is set to become the world’s largest cannabis market, so we check out this European marijuana stock pitch. One of the most bullish analysts in America just put his money where his mouth is. He says, “I’m investing more today than I did back in early 2009.” So we check out his pitch. We read hedge fund investor letters and listen to stock pitches at hedge fund conferences. We also rely on the best performing hedge funds‘ buy/sell signals. Let’s review the key hedge fund action surrounding Pacific Premier Bancorp, Inc. (NASDAQ:PPBI).

At the end of the third quarter, a total of 8 of the hedge funds tracked by Insider Monkey held long positions in this stock, a change of 0% from the previous quarter. On the other hand, there were a total of 9 hedge funds with a bullish position in PPBI a year ago. With the smart money’s sentiment swirling, there exists a few noteworthy hedge fund managers who were boosting their holdings substantially (or already accumulated large positions). 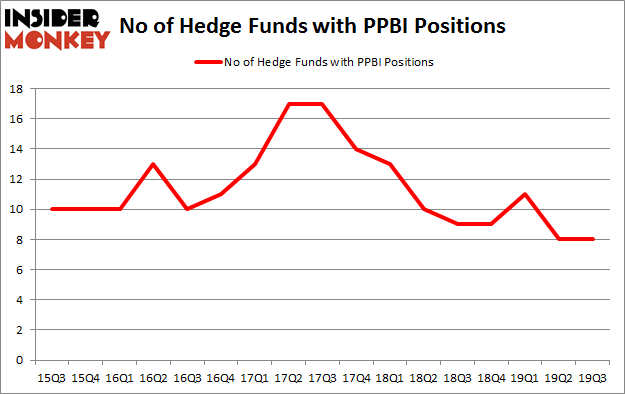 Among these funds, Cardinal Capital held the most valuable stake in Pacific Premier Bancorp, Inc. (NASDAQ:PPBI), which was worth $36.8 million at the end of the third quarter. On the second spot was Millennium Management which amassed $3.8 million worth of shares. Arrowstreet Capital, D E Shaw, and GLG Partners were also very fond of the stock, becoming one of the largest hedge fund holders of the company. In terms of the portfolio weights assigned to each position Cardinal Capital allocated the biggest weight to Pacific Premier Bancorp, Inc. (NASDAQ:PPBI), around 1.22% of its 13F portfolio. Driehaus Capital is also relatively very bullish on the stock, designating 0.02 percent of its 13F equity portfolio to PPBI.

Due to the fact that Pacific Premier Bancorp, Inc. (NASDAQ:PPBI) has witnessed falling interest from the aggregate hedge fund industry, we can see that there is a sect of hedgies who were dropping their positions entirely heading into Q4. It’s worth mentioning that Matthew Lindenbaum’s Basswood Capital cut the largest position of the 750 funds watched by Insider Monkey, comprising close to $12.7 million in stock, and Brian Ashford-Russell and Tim Woolley’s Polar Capital was right behind this move, as the fund dumped about $4.7 million worth. These transactions are intriguing to say the least, as aggregate hedge fund interest stayed the same (this is a bearish signal in our experience).

As you can see these stocks had an average of 19 hedge funds with bullish positions and the average amount invested in these stocks was $185 million. That figure was $46 million in PPBI’s case. Knowles Corp (NYSE:KN) is the most popular stock in this table. On the other hand Columbia Financial, Inc. (NASDAQ:CLBK) is the least popular one with only 10 bullish hedge fund positions. Compared to these stocks Pacific Premier Bancorp, Inc. (NASDAQ:PPBI) is even less popular than CLBK. Hedge funds dodged a bullet by taking a bearish stance towards PPBI. Our calculations showed that the top 20 most popular hedge fund stocks returned 37.4% in 2019 through the end of November and outperformed the S&P 500 ETF (SPY) by 9.9 percentage points. Unfortunately PPBI wasn’t nearly as popular as these 20 stocks (hedge fund sentiment was very bearish); PPBI investors were disappointed as the stock returned 3.4% during the fourth quarter (through the end of November) and underperformed the market. If you are interested in investing in large cap stocks with huge upside potential, you should check out the top 20 most popular stocks among hedge funds as 70 percent of these stocks already outperformed the market so far in Q4.