Is P.H. Glatfelter Company (GLT) A Good Stock To Buy?

The market has been volatile in the last few months as the Federal Reserve continued its rate cuts and uncertainty looms over trade negotiations with China. Small cap stocks have been hit hard as a result, as the Russell 2000 ETF (IWM) has underperformed the larger S&P 500 ETF (SPY) by more than 10 percentage points over the last 12 months. SEC filings and hedge fund investor letters indicate that the smart money seems to be paring back their overall long exposure since summer months, though some funds increased their exposure dramatically at the end of Q2 and the beginning of Q3. In this article, we analyze what the smart money thinks of P.H. Glatfelter Company (NYSE:GLT) and find out how it is affected by hedge funds’ moves.

P.H. Glatfelter Company (NYSE:GLT) shareholders have witnessed a decrease in hedge fund interest in recent months. Our calculations also showed that GLT isn’t among the 30 most popular stocks among hedge funds (see the video below).

Unlike former hedge manager, Dr. Steve Sjuggerud, who is convinced Dow will soar past 40000, our long-short investment strategy doesn’t rely on bull markets to deliver double digit returns. We only rely on hedge fund buy/sell signals. We’re going to take a look at the recent hedge fund action regarding P.H. Glatfelter Company (NYSE:GLT).

Heading into the third quarter of 2019, a total of 6 of the hedge funds tracked by Insider Monkey were long this stock, a change of -40% from one quarter earlier. By comparison, 4 hedge funds held shares or bullish call options in GLT a year ago. With hedge funds’ capital changing hands, there exists a select group of noteworthy hedge fund managers who were boosting their holdings significantly (or already accumulated large positions). 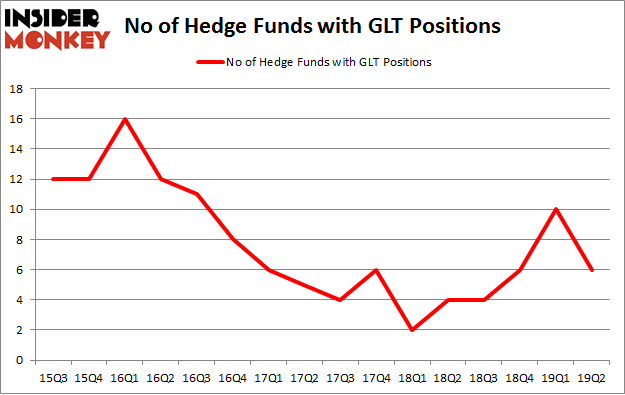 According to publicly available hedge fund and institutional investor holdings data compiled by Insider Monkey, Clint Carlson’s Carlson Capital has the number one position in P.H. Glatfelter Company (NYSE:GLT), worth close to $9.3 million, accounting for 0.1% of its total 13F portfolio. The second largest stake is held by Royce & Associates, managed by Chuck Royce, which holds a $3.5 million position; the fund has less than 0.1%% of its 13F portfolio invested in the stock. Some other hedge funds and institutional investors with similar optimism contain John Overdeck and David Siegel’s Two Sigma Advisors, Israel Englander’s Millennium Management and David Harding’s Winton Capital Management.

Due to the fact that P.H. Glatfelter Company (NYSE:GLT) has faced a decline in interest from the smart money, logic holds that there is a sect of hedgies that elected to cut their entire stakes in the second quarter. At the top of the heap, Mike Vranos’s Ellington sold off the largest stake of the “upper crust” of funds watched by Insider Monkey, comprising about $0.3 million in stock, and Michael Platt and William Reeves’s BlueCrest Capital Mgmt. was right behind this move, as the fund cut about $0.2 million worth. These bearish behaviors are important to note, as total hedge fund interest was cut by 4 funds in the second quarter.

As you can see these stocks had an average of 11 hedge funds with bullish positions and the average amount invested in these stocks was $53 million. That figure was $17 million in GLT’s case. William Lyon Homes (NYSE:WLH) is the most popular stock in this table. On the other hand Zealand Pharma A/S (NASDAQ:ZEAL) is the least popular one with only 2 bullish hedge fund positions. P.H. Glatfelter Company (NYSE:GLT) is not the least popular stock in this group but hedge fund interest is still below average. This is a slightly negative signal and we’d rather spend our time researching stocks that hedge funds are piling on. Our calculations showed that top 20 most popular stocks among hedge funds returned 24.4% in 2019 through September 30th and outperformed the S&P 500 ETF (SPY) by 4 percentage points. Unfortunately GLT wasn’t nearly as popular as these 20 stocks (hedge fund sentiment was quite bearish); GLT investors were disappointed as the stock returned -8.1% during the third quarter and underperformed the market. If you are interested in investing in large cap stocks with huge upside potential, you should check out the top 20 most popular stocks among hedge funds as many of these stocks already outperformed the market so far in 2019.