Is Osiris Therapeutics, Inc. (OSIR) A Good Stock To Buy?

A whopping number of 13F filings filed with U.S. Securities and Exchange Commission has been processed by Insider Monkey so that individual investors can look at the overall hedge fund sentiment towards the stocks included in their watchlists. These freshly-submitted public filings disclose money managers’ equity positions as of the end of the three-month period that ended December 31, so let’s proceed with the discussion of the hedge fund sentiment on Osiris Therapeutics, Inc. (NASDAQ:OSIR).

Osiris Therapeutics, Inc. (NASDAQ:OSIR) has experienced an increase in support from the world’s most elite money managers lately. OSIR was in 8 hedge funds’ portfolios at the end of the fourth quarter of 2018. There were 4 hedge funds in our database with OSIR positions at the end of the previous quarter. Our calculations also showed that OSIR isn’t among the 30 most popular stocks among hedge funds.

Heading into the first quarter of 2019, a total of 8 of the hedge funds tracked by Insider Monkey were bullish on this stock, a change of 100% from one quarter earlier. The graph below displays the number of hedge funds with bullish position in OSIR over the last 14 quarters. With the smart money’s positions undergoing their usual ebb and flow, there exists a few key hedge fund managers who were increasing their stakes significantly (or already accumulated large positions). 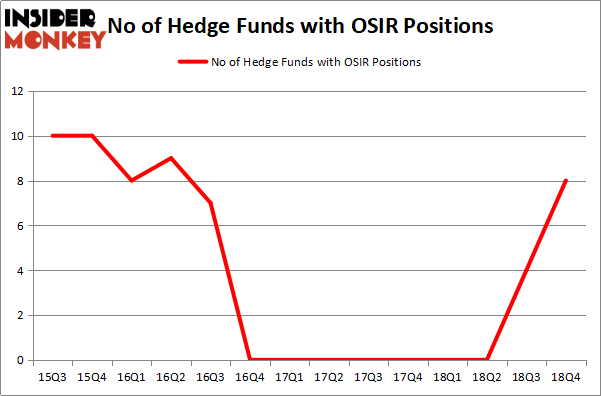 As aggregate interest increased, key money managers were breaking ground themselves. Cloverdale Capital Management, managed by C. Jonathan Gattman, assembled the largest position in Osiris Therapeutics, Inc. (NASDAQ:OSIR). Cloverdale Capital Management had $8.1 million invested in the company at the end of the quarter. Michael Gelband’s ExodusPoint Capital also made a $0.2 million investment in the stock during the quarter. The other funds with brand new OSIR positions are Michael Platt and William Reeves’s BlueCrest Capital Mgmt. and Karim Abbadi and Edward McBride’s Centiva Capital.

As you can see these stocks had an average of 5.5 hedge funds with bullish positions and the average amount invested in these stocks was $18 million. That figure was $11 million in OSIR’s case. FRP Holdings Inc (NASDAQ:FRPH) is the most popular stock in this table. On the other hand Nicolet Bankshares Inc. (NASDAQ:NCBS) is the least popular one with only 3 bullish hedge fund positions. Compared to these stocks Osiris Therapeutics, Inc. (NASDAQ:OSIR) is more popular among hedge funds. Our calculations showed that top 15 most popular stocks) among hedge funds returned 24.2% through April 22nd and outperformed the S&P 500 ETF (SPY) by more than 7 percentage points. Unfortunately OSIR wasn’t nearly as popular as these 15 stock and hedge funds that were betting on OSIR were disappointed as the stock returned -100% and underperformed the market. If you are interested in investing in large cap stocks with huge upside potential, you should check out the top 15 most popular stocks) among hedge funds as 13 of these stocks already outperformed the market this year.