Is Oshkosh Corporation (OSK) A Good Stock To Buy?

Many investors, including Paul Tudor Jones or Stan Druckenmiller, have been saying before the Q4 market crash that the stock market is overvalued due to a low interest rate environment that leads to companies swapping their equity for debt and focusing mostly on short-term performance such as beating the quarterly earnings estimates. In the first half of 2019, most investors recovered all of their Q4 losses as sentiment shifted and optimism dominated the US China trade negotiations. Nevertheless, many of the stocks that delivered strong returns in the first half still sport strong fundamentals and their gains were more related to the general market sentiment rather than their individual performance and hedge funds kept their bullish stance. In this article we will find out how hedge fund sentiment to Oshkosh Corporation (NYSE:OSK) changed recently.

Oshkosh Corporation (NYSE:OSK) shares haven’t seen a lot of action during the second quarter. Overall, hedge fund sentiment was unchanged. The stock was in 24 hedge funds’ portfolios at the end of the second quarter of 2019. At the end of this article we will also compare OSK to other stocks including James Hardie Industries plc (NYSE:JHX), Manpowergroup Inc (NYSE:MAN), and YY Inc (NASDAQ:YY) to get a better sense of its popularity. Our calculations also showed that OSK isn’t among the 30 most popular stocks among hedge funds (view the video below).

In the 21st century investor’s toolkit there are many gauges stock traders use to size up their holdings. A duo of the less known gauges are hedge fund and insider trading moves. Our researchers have shown that, historically, those who follow the best picks of the best fund managers can outperform their index-focused peers by a superb amount (see the details here). 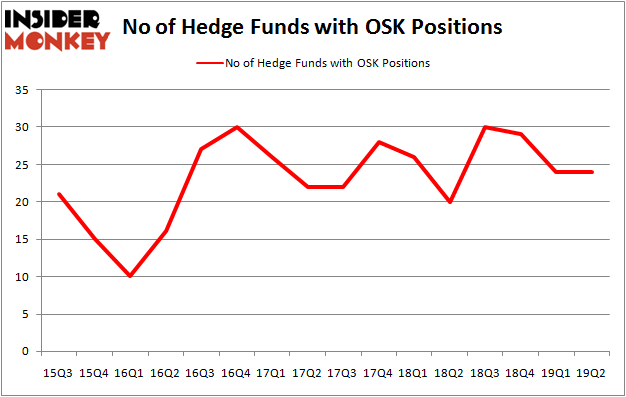 Unlike some fund managers who are betting on Dow reaching 40000 in a year, our long-short investment strategy doesn’t rely on bull markets to deliver double digit returns. We only rely on hedge fund buy/sell signals. We’re going to take a gander at the key hedge fund action regarding Oshkosh Corporation (NYSE:OSK).

Heading into the third quarter of 2019, a total of 24 of the hedge funds tracked by Insider Monkey were bullish on this stock, a change of 0% from the first quarter of 2019. On the other hand, there were a total of 20 hedge funds with a bullish position in OSK a year ago. With hedge funds’ capital changing hands, there exists an “upper tier” of notable hedge fund managers who were adding to their holdings substantially (or already accumulated large positions).

More specifically, AQR Capital Management was the largest shareholder of Oshkosh Corporation (NYSE:OSK), with a stake worth $166.1 million reported as of the end of March. Trailing AQR Capital Management was Two Sigma Advisors, which amassed a stake valued at $42.8 million. Atlantic Investment Management, Holocene Advisors, and Arrowstreet Capital were also very fond of the stock, giving the stock large weights in their portfolios.

Because Oshkosh Corporation (NYSE:OSK) has witnessed bearish sentiment from the entirety of the hedge funds we track, it’s easy to see that there lies a certain “tier” of funds who were dropping their full holdings by the end of the second quarter. At the top of the heap, Phill Gross and Robert Atchinson’s Adage Capital Management dumped the largest position of the 750 funds monitored by Insider Monkey, totaling close to $18.7 million in stock. Renaissance Technologies, also dumped its stock, about $7.2 million worth. These transactions are interesting, as total hedge fund interest stayed the same (this is a bearish signal in our experience).

As you can see these stocks had an average of 16.25 hedge funds with bullish positions and the average amount invested in these stocks was $340 million. That figure was $402 million in OSK’s case. Pegasystems Inc. (NASDAQ:PEGA) is the most popular stock in this table. On the other hand James Hardie Industries plc (NYSE:JHX) is the least popular one with only 2 bullish hedge fund positions. Oshkosh Corporation (NYSE:OSK) is not the most popular stock in this group but hedge fund interest is still above average. This is a slightly positive signal but we’d rather spend our time researching stocks that hedge funds are piling on. Our calculations showed that top 20 most popular stocks among hedge funds returned 24.4% in 2019 through September 30th and outperformed the S&P 500 ETF (SPY) by 4 percentage points. Unfortunately OSK wasn’t nearly as popular as these 20 stocks and hedge funds that were betting on OSK were disappointed as the stock returned -8.8% during the third quarter and underperformed the market. If you are interested in investing in large cap stocks with huge upside potential, you should check out the top 20 most popular stocks among hedge funds as many of these stocks already outperformed the market so far this year.