Is ORIX Corporation (NYSE:IX) a marvelous investment today? Prominent investors are turning bullish. The number of long hedge fund positions advanced by 1 recently. Our calculations also showed that IX isn’t among the 30 most popular stocks among hedge funds.

At the end of the fourth quarter, a total of 7 of the hedge funds tracked by Insider Monkey were long this stock, a change of 17% from the previous quarter. Below, you can check out the change in hedge fund sentiment towards IX over the last 14 quarters. So, let’s examine which hedge funds were among the top holders of the stock and which hedge funds were making big moves. 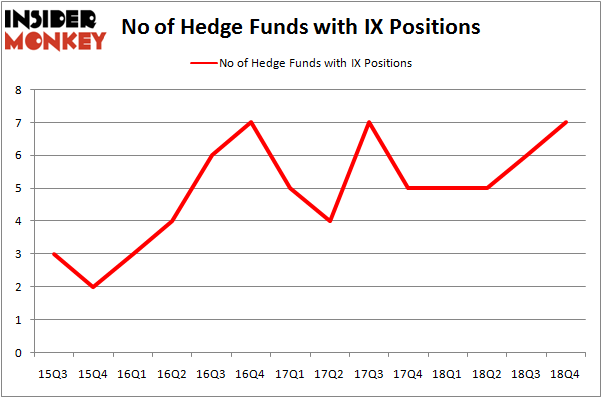 Among these funds, Marshall Wace LLP held the most valuable stake in ORIX Corporation (NYSE:IX), which was worth $2.2 million at the end of the third quarter. On the second spot was Arrowstreet Capital which amassed $1.3 million worth of shares. Moreover, Renaissance Technologies, D E Shaw, and Two Sigma Advisors were also bullish on ORIX Corporation (NYSE:IX), allocating a large percentage of their portfolios to this stock.

As industrywide interest jumped, key hedge funds were breaking ground themselves. Marshall Wace LLP, managed by Paul Marshall and Ian Wace, assembled the most valuable position in ORIX Corporation (NYSE:IX). Marshall Wace LLP had $2.2 million invested in the company at the end of the quarter.

As you can see these stocks had an average of 32 hedge funds with bullish positions and the average amount invested in these stocks was $606 million. That figure was $7 million in IX’s case. Rockwell Automation Inc. (NYSE:ROK) is the most popular stock in this table. On the other hand McCormick & Company, Incorporated (NYSE:MKC) is the least popular one with only 28 bullish hedge fund positions. Compared to these stocks ORIX Corporation (NYSE:IX) is even less popular than MKC. Hedge funds clearly don’t like the stock. Our calculations showed that top 15 most popular stocks among hedge funds returned 19.7% through March 15th and outperformed the S&P 500 ETF (SPY) by 6.6 percentage points. Unfortunately IX wasn’t in this group. Hedge funds that bet on IX were disappointed as the stock lost 2.2% and underperformed the market. If you are interested in investing in large cap stocks, you should check out the top 15 hedge fund stocks as 13 of these outperformed the market.